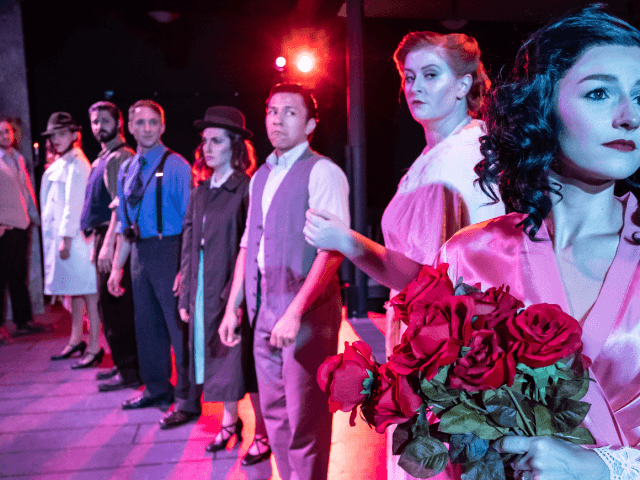 Richard Hannay (Adam Marcantoni), bored with the London socialite scene, is entangled in a top secret plot to steal vital military information after a mysterious woman he brings home from the theater (Kayla Ryan Walsh) is murdered in his apartment. Wanted for murder, Hannay embarks on an adventure that finds him crossing dark moors, assuming false identities, climbing aboard trains, dangling from bridges, and meeting a turgid blonde (also portrayed by Walsh).

Spies, traveling salesman, innkeepers, newsboys, policemen, railroad porters, the film’s antagonist Professor Jordan, and all of the remaining characters are portrayed by Patrick Monaghan and Linnea Scott. Their quickfire costume and accessory changes, contagious physical energy, and myriad of accents were a delight to view. A particular scene in which the two actors play four characters at once in the lobby of a Scottish inn was a highlight of the show.

The parody, adapted from the Hitchcock film by Patrick Barlow, becomes an immersive experience with the actors frequently breaking the fourth wall and implementing the entirety of the space. References to Hitchcock’s films were strewn about this fast-paced, laugh-a-minute spy thriller.

“The 39 Steps” is an original concept by Simon Corble and Nobby Dimon based on the 1915 book by John Buchan and the 1935 film by Alfred Hitchcock. The original London production opened at the Tricycle Theatre in Kilburn in August 2006 and transferred to the Criterion Theatre in the West End in September 2006. The play ran for nine years, making it the fifth longest running play in West End history.