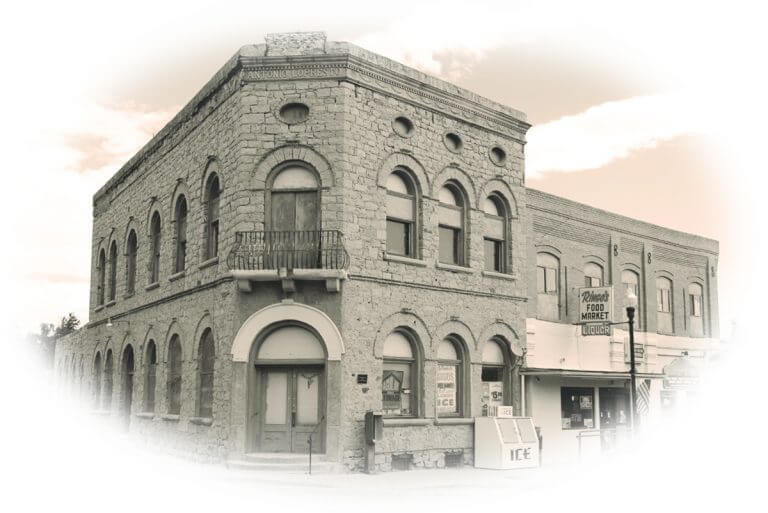 Aguilar, A Quiet Town with a Colorful Past “Gangster Paradise”

Aguilar was a prosperous town even as early as 1894, the year of incorporation. Soon there were three large mines west of town, which initiated growth, and the population reached its highest point at about 2,500. Along with the large number of Italian laborers who migrated to America in the late 1800s and early 1900s, was the migration of members of the Mafia and Black Hand organizations.

The Mafia, a secretive criminal enterprise, only allowed members of Sicilian birth to join. However, the Black Hand allowed other Italians and Sicilians. Prohibition laws gave them the means to expand. Aguilar became known as a “hide out” for the Mafia in the 1920s. Local legend has it that notorious gangster Al Capone and his men hid in Aguilar till “things cooled down.” Capone and “Joe Bananas” even attended a wedding of one of their cohorts here. Prohibition lead to bootlegging operations and murders.

In downtown Aguilar, Antonio LoPresto built the Arcade Building of native sandstone in the early 1900s. He operated a “soft drink parlor” and restaurant. The second story balcony having a “history” of its own remains today, as well as the underground tunnels of the infamous Prohibition days.

From –What Made Trinidad-Trinidad–
by Louise Le Barre Hanks

– “Prohibition had come to Colorado in 1916. One of the biggest hauls ever made by the sheriff’s department occurred on Main Street in Aguilar. Seized were 200 gallons of wine, a large quantity of White Mule, 50 gallons of raisin mash in the process of fermentation, a distilling plant and other appurtenances of an illicit bootleg business. Aguilar was referred to as “Little Chicago” because of the large number of liquor violations and its connection with organized crime, the Mafia in particular.” An article many years later portrays that half the population of Aguilar engaged in bootlegging, including fathers, mothers and grandparents. Signals given when the Revenue Agents were in the vicinity and shots fired alerted everyone. The agents could easily spot the small operator by his snoring pigs and unsteady chickens. Not wasting the corn mash, he would feed it to his pigs and chickens. Underground tunnels built for the illicit operator’s quick getaways were numerous.

“In this little town eight murders have been committed in the last eighteen months, and the criminals remain unpunished. Away in the hills, hidden in the darkness of an abandoned mine, a brewery is busily turning out liquor into the surrounding districts. Sixteen places on Main Street of Aguilar, so called hotels, blacksmith shops, groceries and candy stores are selling liquor. And Colorado is Dry!” Three miles out of the town of Aguilar, over a rough and desolate road, is a notorious resort – “29 July Saloon.” So called because on that day King Humbert of Italy was assassinated. Owned by Fran Mazzola, called “Roma,” it was the location of many neighborhood gatherings with games, horseshoe pitching, greased pig races and of course, “Bocha.” Roma, a devout anarchist, decided to celebrate the death of the Italian King. However, few people were aware of why the festivities originated. Roma’s specialized ability in cooking gained him a notorious reputation in the local hills. A model citizen with a big heart, his generosity to children and extending credit, never expected to be paid back.

What stopped bootlegging was not law enforcement efforts, but the end of prohibition. Crime families now relied heavily on illegal activities such as loan sharking, gambling and for some, narcotics.