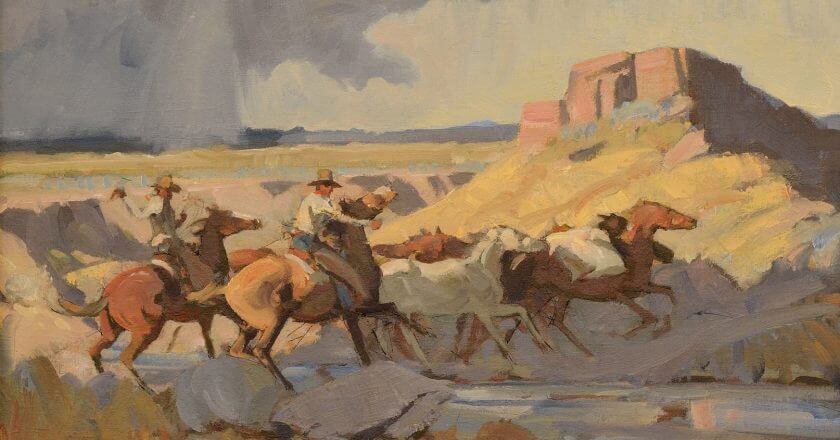 A.R. Mitchell Painted Life As He Really Saw It

Reminder
The A.R. Mitchell Museum is Closed for the Summer Season

c 2018 by Jan MacKell Collins
On a chilly December day in 1889, a child was born on a lonely homestead west of Trinidad. Little did anyone know, rather than follow his coal mining father’s footsteps, Arthur Roy “Mitch” Mitchell was destined to

pursue a much more colorful life as an illustrator, fine artist, art teacher, historian and preservationist.

Mitchell was born at the perfect time. Trinidad, a frequented destination along the historic Santa Fe Trail, was surrounded by ranches. Cowboys were a familiar sight in town, and it was their hardworking lifestyles that the artist appreciated most. Mitchell knew he needed to learn the trade and discover first-hand what being a cowboy was really like in order to portray them in paint, and also create more inspiration in from the land that lay beyond Trinidad.

At age 17, Mitchell first set out for New Mexico and worked as a ranch hand for the Adams Cattle Company. He was back in Trinidad by 1909 finishing out his schooling at the new family home on Ash Street. For a time, he also worked for Trinidad’s Chronicle News. The 1910 census, however, reveals Mitchell was doing what he really wanted to do: working as an artist.

The urge to wander soon struck Mitchell again. Within a few years, he was on the road once more traveling to the Pacific Northwestern state of Washington. When he registered for the draft for World War I, a city clerk in Walla Walla verified he was selling advertising for the newspaper there. After the war, he next worked for the Post-Intelligencer newspaper in Seattle. Clearly, however, selling advertising failed to satiate Mitchell’s appetite for painting. On a whim and a prayer, he sold nearly everything he owned and found his way to New York where he attended the Grand Central School of Art under art professor Harvey Dunn.

Dunn proved to be an excellent mentor and friend. While in New York, Mitchell began a 30-year career of painting pulp magazine and book covers. His career continued to blossom as he followed Dunn to Leonia, New Jersey. By the 1940’s, he had rendered over 160 covers in all. His talents have rightfully earned him the title of “King of Western Pulp” by modern day art critics. Yet, he never forgot the enchantment of the west returning to visit when he could, and continuing to capture scenic landscapes and people on canvas.

In about 1944, Mitchell had seen enough of the east and returned to Trinidad and was offered a job as the first professor to teach Art at Trinidad State Junior College. It was a position he held until 1958, combined with creating his own works of art. It was his more serious artwork—paintings depicting cowboys at work with special attention to detail, complimented by vividly colorful landscapes—that eventually made him comparable to the likes of Frederick Remington, Charles Russell, and even Charles Craig.

His goal was to create “paintings of the real cowboy, not the movie variety”, which he achieved with a flair seldom seen in other period art circles. Desiring the most authentic effects in his work, Mitchell collected hundreds of artifacts and items representative of the cowboy way of life such as camp coffee pots to saddles and pottery to Indian blankets, for reference while working. Outside the studio, he still favored traveling. When a particular landscape caught his fancy on the road, he was known to stop his car and paint en plein air, capturing the beauty of the solitary and wondrous scenes around him.

Being a nomadic artist was a lonely business. Perhaps the reason Mitchell never married. His work was his one true love and he followed themes that were familiar and comfortable to him: cowboys and cowgirls, horses, cattle, Native Americans, and the stellar plains and prairies of southern Colorado and northern New Mexico. Some of his art was inspired by the pueblo adobes around Santa Fe. He also made paintings of more famous figures such as Billy the Kid and Kit Carson, as well as works depicting travelers on the Santa Fe trail and battles between Native American tribes.

In 1959, Mitchell was chosen to render the logo for the “Rush to the Rockies” Centennial celebration. In time, he also worked to preserve and many of Trinidad’s historic buildings, including the Baca House and Bloom Mansion museums. After his work for “Rush to the Rockies”, Trinidad could no longer keep Mitchell a secret. His artwork gained more and more fame. In 1973,  he was named an honorary member of the Cowboy Artists of America. The following year he was inducted into the National Academy of Western Art at the National Cowboy Hall of Fame in Oklahoma. Only a year after that, the Hall of Fame also bestowed the Honorary Trustee Award on the revered artist.

“You look back over the trail, and you see the fine friends you’ve made, and you see you’ve managed to make a living doing what you loved,” Mitchell once quipped about his illustrious life, “so how could anyone ask for more?”

He was still painting in 1975 when he moved to Denver to be closer to his sister, Ethel Erickson. After his death in 1977, it was Erickson who spearheaded the opening of the A.R. Mitchell Museum of Art in Trinidad. The museum staged a grand opening in 1981, just a year before Erickson’s death. In 1989, the museum expanded into the former Jamieson Dry Goods Store, whose historic interior remains intact. Mitchell would have liked that.

Today, Mitchell’s iconic works adorn the walls of his namesake museum; over 350 in all. Also on display are the early western, Hispanic and Native American artworks and textiles from Mitchell’s own collection. This hidden gem of museums in Colorado is a must-see for lovers of art but also history, as well as the charmed and nomadic life of a painter who followed his dreams.