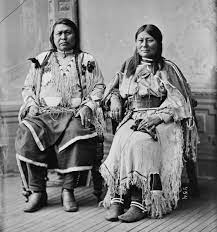 On the night of November 13 1833, Ouray entered the world in the small Pueblo Community of Taos, New Mexico. As an omen to a life of fame and leadership, the Leonid meteor flashed across the sky.  Raised by a wealthy Spanish couple and educated by Catholic friars, he learned Spanish, English, Apache, Ute and Indian Sign language.

When he was 18, he moved north to Colorado to live with his Tabequache Ute tribe and parents.  After his Apache father died, he became leader of his tribe.  He married and had a son.  When his young wife died, an adopted Kiowa, Chipeta, became the son’s caretaker and they later married.

For many years, Ouray, Chipeta and his son lived a normal Plains Indian life.  As white people came west and encroached upon their land, the Utes nominated Ouray to be a negotiator for their rights.  The white government named him as chief of the Utes.

Ouray believed war with the white people would lead only to the eventual extermination of the Ute people.  His negotiation skills helped prevent the kind of massacres and deprivations that other more warlike tribes suffered.  At one point, he negotiated all lands east of the Rocky Mountains, approximately 1 million acres, to be Ute lands. With the discovery of gold, miners and the government bought out Ute lands and evicted them.

Chipita traveled with her husband to negotiations, signings of treaties, meetings with government officials and tribal leaders.  Even by today’s standards of female liberation, Chipeta’s companionship appearance at such events, was rare!  Though Ouray met with open hostility from many of the tribe’s people, living through many attempts on his life, Chipita remained loved by both the Natives and the whites.

The Tabequache Utes were moved to the White River Area of Northern Colorado.  When Nathan Meeker became the despotic leader of the Indian Agency, vengeful Utes murdered him and several white men at the agency and captured several white women as hostages.  Subsequently engaged by the government, Ouray and Chipeta negotiated for the safe release of the hostages.  The entire tribe of Utes was punished for the massacre and moved to Uintah in Utah.

President Rutherford B. Harding stated:  “Chief Ouray was the most intellectual man I have ever conversed with.”

Chipeta lived in obscurity for many years until 1923 when President Taft requested she accompany him on his train to the opening of the Gunnison River Gateway near Montrose. After her death, the people of Montrose had her re-buried at the site of the Ute Indian Museum on Chipeta Road.

The Mountain, Southern and Northern Ute tribes have united to create a state-of-the-art museum in Montrose to reflect Ute cultural historical authenticity and to display current Native art and sculptor.  A peace pole, in honor of Ouray and Chipita, graces the riverside park near the museum.