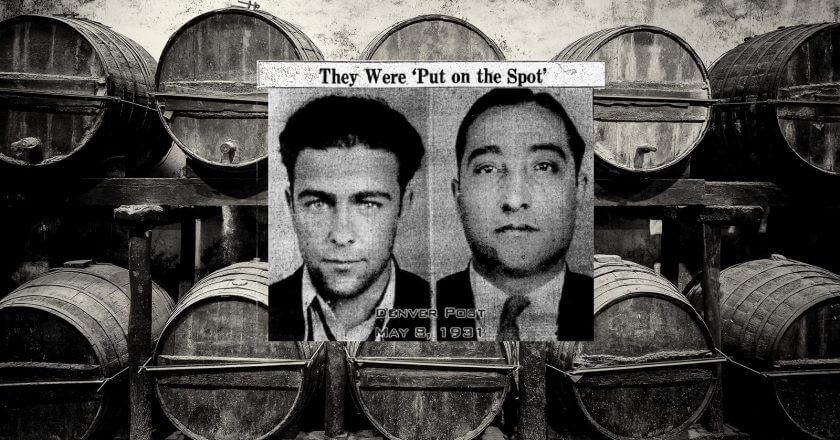 article by: Bob Silva
The good intentions that promoted Prohibition from 1920 to 1933 in the United States was a disaster in no uncertain terms. The intentions were meant to slow down crime and corruption and create a greater teetotaler society for a better social population. Consumption of alcohol was out of hand and one family after another suffered the consequences. A reduction in drinking was initially seen at the start of Prohibition, but as time went on drinking went back to the norm and even gained momentum – the percent of the drinking public increased.

Crime was crime before Prohibition, but with Prohibition crime increased and became organized and worst of all corruption entered into the world of public officials; money talks, and money bought many government civil servants.
The Black Hand (Italian: Mano Nera) was a secret society or syndicate that were extortionists that dates back to around the 1880s in the United States. A good report was written titled: BUREAU OF INVESTIGATION REPORTS REGARDING BLACKHAND ACTIVITIES IN SOUTHERN COLORADO, Dec. 14, 1918. The report was written by Officer Roy O. Samson. Officer Samson starts his report as follows: Continuing my report of Dec. 6th, I today received from Mr. J.P. Dunlavy, Under Sheriff, Trinidad, Colo., the two letters received by Joseph Castiglia. The report is 70 pages and can be read on line with original photo copies received by Black Handers. It was one of the worst epidemics to hit Southern Colorado and it was not from disease, but from gang related shooting and killings.

The people feared the Black Handers making it impossible for law enforcement to obtain information of gunned down victims. Those that braved to come forward to supply information to law enforcement would vanish only for their bodies to be found in some lone arroyo. Crime by the Black Handers didn’t stop, it just continued with gang wars and more during the early 1900s.

In 1907, the editor of the Trinidad Advertiser received a letter from a Black Hand by the name of Nicolini. Nicolini made it clear in the note that he had killed 13 others for money since leaving Italy, and that an additional 13 other Las Animas citizens were on his list. Sheriff Louis Krieger, Senator Frank Woods, Judge Mahin, Mayor Nichols and banker Jeffreys all appeared on the list.

The Colorado front-range from Denver to Trinidad in the early 1900s saw one killing after another that law enforcement attributed to the Black Handers. In Pueblo, Sam Pagano was the leader of the Black Hand group. The organization left the Italian families in fear as they never knew if they would be the next ones to be targeted with an extortionist letter or by fast flying lead.

On January 1, 1916, it became unlawful in Colorado to have, or sell intoxicating liquor. Any alcoholic beverage with over 1.28 % alcohol under the Prohibition Act.

Four years later, in January 1920 (the 18th Amendment) the Volstead Act was to create a dry America where alcohol would become something of the past; this was nothing but wishful thinking. If anything this just encouraged people into making their own booze (one can say that the majority of the USA population became bootleggers) some that made their own drinking alcohol went on to sell it. The Volstead Act brought about Prohibition, but not the lack of booze. People didn’t turn their cheek to having their glass of wine, bottle of beer, or their shots of whiskey.

It was Prohibition in 1920 that saw the Black Hand extortionist move into the more lucrative business of bootlegging booze. Al Capone was a very good example of one Mafioso who made millions of dollars by making Prohibition a business. Prohibition was a dream come true for organized crime and millions upon millions of dollars were made by the Mafioso’s, rum-runners, and others. Crime was at an all-time high, but much of the crime was gun wars between territorial gangs and families, and it didn’t matter if you were a Carlino from Trinidad, or one of the Danna’s from Pueblo. Others such as Joseph Piscopo, Lomeli, or a hit man such as Lucia or Jack DeGrado from Trinidad – the list was endless when it came to crime figures.

In the summer of 1925, John Danna was killed in Pueblo, but the previous couple of years had seen one Black Hand member after another go down. The Danna’s and the Carlino’s shot it out in their rival family gang war (the Carlino’s resided in Trinidad). In May 1926, two of the Danna brothers were shot in Pueblo, but the trail for their killers lead to Aguilar, and then to El Moro a small town Northeast of Trinidad. The killings continued as it was a fight for control of bootlegging territory. On May 7, 1930, Sam Danna was gunned down in an alley in Pueblo. Four of the Danna brothers had fallen to blazing guns; now with the Danna brothers all taken down, the Carlino family set their sights on a bigger piece of pie. The Carlino’s moved in 1930 from Trinidad to Denver where added territory would add to their bootlegging business. The Carlino’s had a surprise in Denver as Tony Loma was the main man.

Law enforcement were constantly faced with interviewing witnesses that at some point were considered key witnesses to shooting, but when questioned in the courts, their stories changed.

1931 was a year that kept the mobsters busy in killings. Sam Carlino would be the first to fall at home in Denver to the gun of Bruno Mauro. None of Sam Carlino’s gang associates from Trinidad and Pueblo attended his funeral; one can say it was a case of self-preservation. Another mobster that lived in Trinidad was John Chat. The territories from Trinidad to Denver that once crawled with Black Hand extortionists prior to Prohibition were now Mafioso’s in the 1930s.

Pete Carlino was pretty confident in his mob organization and made it known that he was going after Joe Roma and his group in Denver. Things just didn’t work out that way as it was Sam Carlino that first went down and then some of his gang members were arrested and sentenced, while others moved out of the state. Pete himself was arrested and went to jail, and who else would come to his rescue, but no other than Joe Roma. On September 14, 1931, Pete Carlino’s body was found between Pueblo and Wetmore. The question remains; was it some of Danna’s sympathizers, or was it one of Roma gang members, or some other bootlegger that was out to get Pete Carlino that took him down?

It was a wild time in Denver as the bootleggers were a dime a dozen and there was no end to the violence. There were many arrests, but few convictions. Thompson submachine guns had entered the city as the truth between bootlegging gangs was constantly being broken as one gang held up another gang for their liquor. This was not Al Capone territory, but it would have been hard to differentiate between the bootlegging gang wars going on in Southern Colorado or those of Chicago in the 1930s.

Clyde and Eugene Smaldone were another set of bootleggers making headlines in Denver. From racketeering to raiding stills there was always something new – except for those that were shot and went to the hospital for treatment. The story was always the same – they had shot themselves while small game hunting – who was to question – no one dared.
The gangs, bootleggers, Mafia, Black Hands and racketeers were a vicious group and on Feb. 17, 1933, Joe Roma was gunned downed at home. Life was “not worth a plug nickel” and those in the business would eventually cross paths with another gun. Clyde Smaldone would go on to be the Mafia king in Denver.

The 18th Amendment was ratified in 1919 but was repealed in December 1933 during President Franklin D. Roosevelt’s term in office. The days of the bootleggers and the Mafia would be greatly impacted, but the years of Prohibition had left its mark with hundreds of gangsters and bootleggers filling the obituary pages weekly.

With Prohibition being something of the past the bootleggers and Mafia had to find other methods to bring them money. The Mafia, Blackhand’s, gangs and mobsters fell back to gambling, prostitution, loan sharking, narcotics and even entering into labor unions. The saying goes, “where there’s a will, there’s a way,” and the Mafioso’s are professional. Their sacred code of silence known as “Omerta” made it very difficult to penetrate family activities.

The Mafia organization at one time grew to have 24 families throughout the United States. One of these family members was Joseph Bonanno who was to have operated a cheese shop in Trinidad. Mafioso Joe Bonanno made millions during his active years of Mafia operations and invested in private enterprises. Joe Bonanno led quite an interesting life and lived to the age of 97, and is buried in Tucson, AZ. More can be read in the book titled, “A Man of Honor, the autobiography of Joseph Bonanno.”

The year is 2018 and the Mafioso families live on – in New York, five Mafia families are alive and well: Genovese, Gambino, Lucchese, Bonanno and Colombo.

Bob Silva Author, Publisher & Photographer.
Mr. Silva has now completed a series children’s book titled, “Nippy and Skippy, the friendly Dinosaurs.” The book is scheduled for a November publication and orders can be placed at: www.2gunspublishing.com