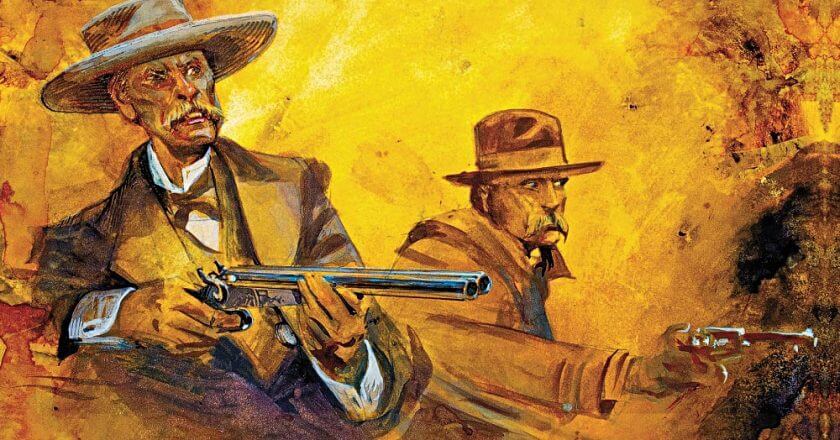 The name Doc Holliday conjures images of gambling halls and gunfights and a legendary showdown between cowboys and lawmen on a dusty street near the OK Corral. But perhaps the most dramatic episode in Doc’s Western life happened not in the silver mining camp of Tombstone, but in the Santa Fe Trail town of Trinidad in the Sangre de Cristo Mountains of southeastern Colorado.

It was fall of 1878, and John Henry “Doc” Holliday was newly arrived in Trinidad after several months in Dodge City, where he’d played cards and pulled teeth and, according to Dodge City lawman Bat Masterson, mostly stayed out of trouble. Dodge was a fine place for a traveling dentist to spend the cattle drive season, with hundreds of cowboys coming into town with fresh trail pay in their pockets—and often bad teeth that needed dental work. But Dodge was also hot that summer—101 in the shade, where one could find any—and dusty, which was bad for a man battling the lung disease called “Consumption,” now known as Tuberculosis. So when the cowboys moved on, so did Doc, taking his mistress Kate Elder with him for ride on the Santa Fe Railroad, headed to the cooler climate of the Animas Valley in Colorado.

Trinidad had been established in 1862 where the Purgatoire River crossed the Santa Fe Trail, and with the arrival of the Denver & Rio Grande Railroad in 1876 and the Atchison, Topeka & Santa Fe in 1878, Trinidad had quickly become the major shipping point for most of New Mexico, Arizona, and West Texas. The town boasted a population of 3,000 permanent residents that summer, with eighty-three stores, three hotels, a daily newspaper and mail, and a red-light district that was the wonder of Colorado. Doc Holliday didn’t wait long to add to the city’s excitement.

According to Bat Masterson, who would later become marshal of Trinidad, soon after Doc’s arrival he got into an altercation with a local sport by the name of Kid Colton, shooting and seriously wounding him.  Although no legal record remains of either the incident or the victim, Bat claimed it was the Kid Colton shooting that made Doc move on again.  Kate Elder, however, tells a much different story in her later memoirs: “Doc was taken sick so we had to stay in Trinidad ten days.  Then we had to hire an outfit to take us to Las Vegas, New Mexico.  We traveled with a big freight outfit.  The railroad was built only a few miles out from Trinidad.  This was in November…and we arrived a few days before Christmas.”

Kate’s sparse writing doesn’t do justice to the ordeal.  With the railroad into New Mexico not yet complete, she and Doc traveled by covered wagon on the rutted Santa Fe Trail.  South of Trinidad, the trail crossed over the treacherous Raton Pass, elevation 7,834 feet with a grade so steep that wagons had to be tied down onto huge iron rings hammered into the mountainside to keep from careening out of control.  The crossing averaged five days, the wagons crawling to the crest of the mountain and then crawling back down the other side.  In the deep ravines below the road were the remnants of wagons that hadn’t survived the crossing: wheels and axles and harness-trees smashed to pieces along Raton Creek.  Beyond the pass, the road became easier, the mountain falling away into long plateaus with the green meadows of New Mexico lying ahead—except that Doc and Kate made the trip in the snowy late fall when the temperatures were frigid.  Freight outfits stopped often to water and rest the horses, camping along the way, and the nights would have been cold and dangerous for a sick man.  They surely welcomed one night of warmth in a real bed at Cimarron’s St. James Hotel, in spite of the noise from brawls and gunfights in the barroom below.  And past Cimarron was the last landmark of the Santa Fe Trail, the stone uprising called Wagon Mound, looking like a carved prairie schooner with a canvas canopy blowing open in the wind.  Then finally, the red adobe fortress of Fort Union, the end of the wagon train’s trail.

As Kate’s recollections don’t give all the details of the journey, they also don’t say why she chose to take Doc on such a harrowing adventure—the teamster who drove them remembered a man “in bad shape, and his ‘woman friend,’ who spoke with a German accent’.”  The answer lies in their final destination: not the old Spanish town of Las Vegas where the teamster delivered them, but the hot mineral springs up nearby Gallinas Canyon.

The Montezuma Hot Springs had been famous for a hundred years or more, named after the ancient Mexican king who supposedly took the healing waters there. The springs bubbled up out of the rocky bed of the Rio Gallinas, steaming and smelling of sulfur and drawing visitors from all over the country to come sit in the shallow pools carved by the water. Near the pools, a bathhouse had been erected and the hot mineral water diverted into tubs and showers where an attentive staff provided personal care. The regimen was simple: wash in the clear stream water then soak in the steaming sulfur pools, letting the minerals permeate through the vital fluids of the body.  Modern medical practice held that the sulfur water would change the chemistry of the body, helping to fight off illness. Consumptives came by the droves, as did sufferers of a hundred other ailments, and some were even cured.

Above the stream and the springs, connected to the bathhouse by a narrow footbridge, was the new Hot Springs Hotel, elegant in native red granite, with a main floor lobby and guest rooms on the second and third floors.  From the white-painted verandah and balconies that wrapped the building, guests could take the clear mountain air and enjoy the healing view of the pine-covered canyon walls.  But it was the smell of the place that visitors most remembered: the hot sulfur pools stinking like rotting eggs and the sweet fragrance of the Piñon pines.

Milagro!, the Spanish-speaking locals called the cures of the Montezuma Hot Springs, and Doc Holliday seemed to be one of them.  After taking sick in Trinidad, after traveling the Santa Fe Trail, after soaking and steaming and breathing in the sulfur and pine-scented air, he was finally well enough to start gambling and practicing dentistry again.  And Kate Elder, at least for that part of their journey, was the heroine of the story.  As for the unverifiable Kid Colton shooting back in Trinidad, Doc may have made up that story himself, preferring to have a reputation as a dangerous man to a dying one.