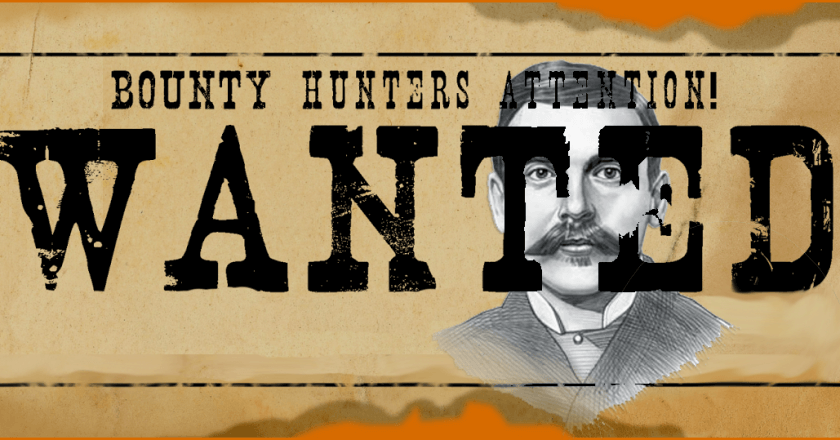 “John ‘Doc’ Holliday [is] one of the most noted desperadoes in the West. In comparison, Billy the Kid, or any other of the many Western desperadoes who have recently met their fate, fade into insignificance. The murders committed by him are counted by the scores, and his other crimes are legion. For years he has roamed the West, gaining his living by gambling, robbery and murder. In the Southwest his name is a terror. In fact, he is no other a personage than the leader of the murderous gang of cowboys who have been lately operating in the vicinity of Tombstone, Arizona, and the head of the lawless element of Tucson, Arizona.”

This wholly inaccurate article appeared in the May 16, l882, issue of the Denver Republican. It was only one of many that exaggerated the criminal life of John Henry “Doc” Holliday. In the fall of 1881, Doc Holliday rode with Wyatt Earp on the legendary Vendetta ride against the cowboys who had murdered Morgan Earp and maimed Virgil Earp. At no time did Holliday ride with, let alone lead, the cowboy faction of Tucson, Arizona. Holliday’s reputation as a drunkard and killer was greatly enhanced by none other than Bartholomew William Barclay “Bat” Masterson. In 1907, Masterson wrote a lengthy article regarding Holliday. Of the relationship between the two men, Masterson wrote, “I put up with Doc for the sake of Wyatt Earp.” Describing the man he disliked, Masterson had this to say:

“Of mean disposition, ungovernable temper, and a most dangerous man. If there was anything Holliday loved better than a poker game, it was conflict.”

Conversely, Wyatt Earp always spoke highly of his friend, Doc Holliday. He once related:
“I am a friend of Doc Holliday because when I was city marshal of Dodge City, Kansas, he came to my rescue and saved my life when I was surrounded by desperadoes.”

At Trinidad’s Imperial Saloon on April 16, 1882, John Allen quarreled with Cockeyed Frank Loving, an old gambling friend of Holliday’s from Dodge City, Kansas. When Allen pulled his gun and mortally wounded Loving, Bat Masterson stepped in and calmed the crowd. The next day Masterson was sworn in as marshal of Trinidad by the town fathers.

Not long after Masterson had settled into his new job Wyatt Earp and his posse, including Wyatt’s youngest brother Warren, Doc Holliday, Texas Jack Vermillion, Sherman McMasters and Turkey Creek Jack Johnson, arrived at the train depot at El Moro, very near Trinidad. Masterson joined them for a final meeting before everyone went their separate ways. However, Holliday rather enjoyed the gambling establishments of Trinidad and chose to stay for an extended period of time. Apparently that sentiment was not reciprocated by all in Trinidad as the Trinidad News of May 4, 1882, did not make mention of Doc Holliday.

“Messrs. Wyatt and Warren Earp are still with us. Their brothers went South Wednesday morning. Again the News takes great pleasure in saying they are all ‘way up’ boys – gentlemen of the first order.”

This was not Doc Holliday’s first visit to Trinidad. He and his paramour, “Big Nose” Kate Elder, a prostitute also known as Mary Katherine Harony, had spent a short time there in December 1878. According to Masterson, the dysfunctional couple left dry dusty Dodge City, Kansas, for Holliday’s health. Again, Masterson, who was in Dodge City at the time, described Holliday:

“It was easily seen that he was not a healthy man for he not only looked the part, but he incessantly coughed it as well.”

According to Masterson, approximately a week after Holliday arrived in Trinidad, “he shot and seriously wounded a young sport by the name of Kid Colton over a trivial matter.” Wyatt Earp also recalled the incident, although he referred to the victim as Kid Dalton. However, there is no record of this altercation, either in the newspapers or in Holliday’s criminal record. Nevertheless, Holliday and Big Nose Kate left Trinidad in a heavy snowstorm bound for Las Vegas, New Mexico.

On May 5, 1882, the Earp brothers, along with Masterson and Holliday, went to Pueblo, where they took in the prize fight between Byron Campbell and Thomas B. Walling. Within the first few rounds the fight became a farce as there was no referee. Following the fight, the group said their goodbyes and Holliday and Masterson returned to Trinidad. For the next five days Holliday gambled in the various saloons and hotels in Trinidad.

On May 10, Holliday left Trinidad for Pueblo. It would be the last time he would ever visit southern Colorado. Settling in at Pueblo, Holliday made a point to introduce himself to the local law enforcement. When he met with Pueblo chief of police, Patrick Desmond, Holliday realized the two were old acquaintances from their time with the Royal Gorge War in 1878. The Pueblo Chieftain of May 17, 1882, reported on Holliday’s stay in their city:

“He [Holliday] made no effort to conceal his identity, and when questioned as to his doings in Arizona, said he had nothing to fear from that quarter, as he had received full pardon from the governor for his bloody work, in consideration of the effective services he had rendered to the authorities.”

The gunfighter-dentist must have believed his good public persona would help him set his reputation straight. It was not to be. Due to his sordid past deeds it was that reputation that followed him rather than the one he was trying to improve. When another reporter peppered him with questions about his past, Holliday had had enough. He replied:

“I’m not traveling about the country in search of notoriety, and I think you newspaper fellows have already had a fair hack at me.”

In a strange way, Holliday’s reputation seems to have helped him. From the time Doc Holliday left Trinidad until his Colorado death in Leadville in 1887, he was involved in only one more deadly shooting.