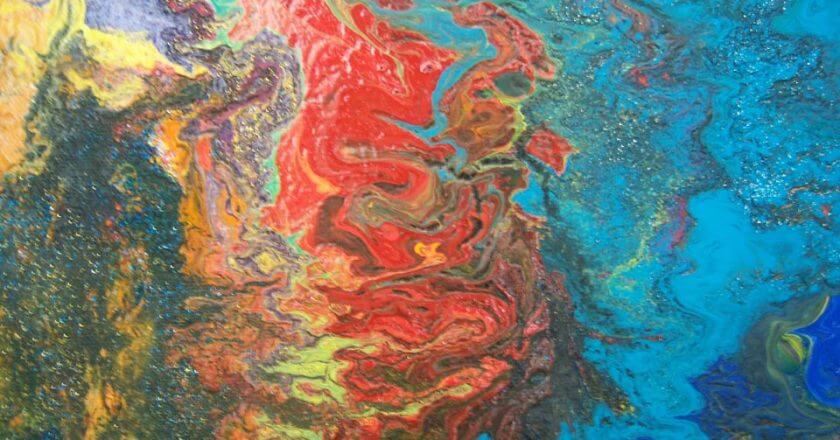 From Our Spring 2017 Edition
By Darby Shier

I began prepping for this article in all of my usual ways. I studied my Writing on Art textbook from college and read model texts on other abstract artists. All of this was because I wanted desperately to capture the spirit and creativity of the artist and legend of my youth, John Raggio. However, when I entered the One Raggio! Avant-Garde Art Gallery on 108 South Commercial Street I realized the limiting vocabulary of my schoolbooks would not serve this particular piece, because this article would be on the man and his the incredible creative process that he uses to develop his one of a kind style.

John Raggio known by locals as Raggio began his art career when he was 18 years old as means of recovering from a head injury sustained during a motorcycle accident that resulted in a three-day coma. He now views the accident as a blessing, stating, “I was fortunate enough to have my life altered constructively.”

As a child he never viewed himself as an artist. Although he grew up in a family that encouraged art and creativity he always compared himself to his sister who was more proficient at realistic drawing than he was. He explained, “I was always kind of creative but it didn’t matter because I thought everyone was creative. As a kid I was able to experience making my own skateboards, kites, and pushcarts. Although I didn’t know it at the time I can now see that the ability to build, something kids miss out on today because of electronic devices, is so important. ” He feels fortunate to have grown up in an age that did not value television, computers and smart phones. He stated, “I feel gratitude for having grown up in a time when technology was not around. It was not a distraction and I was able to find my self. I found myself on the potters wheel which eventually lead me to the art in the beginning.”

Raggio holds a Masters in Clay Sculpture from San Diego State University in California and feels his path to becoming a professional artist was organic. He stated, “In college I discovered I was meant to be creative with my hands and my mind. The potter’s wheel turned me on and got me spinning in the right direction.”

Raggio’s creative process is unique in that he goes with the flow and believes there are no mistakes in art. He states, “My creative process began on the second day of my first pottery class when one of my symmetrical pots began to take on a non symmetrical shape. I got frustrated and chucked my piece off to the right. As is collapsed on the ground, I thought WOW! I was not looking at a failed sculpture but a face. I immediately jumped up and put a nose, eyes, and hair on my once distorted pot. This is when I realized I could never make a mistake in pottery. I have been following that bliss and having fun ever since.”

Raggio believes it is the dance between the left and right hemispheres of the brain that allow him to be creative and complete work. For him, one work flows into another. He states that his left-brain allows him to create the work but it is his right brain that allows him to

see outside the box. He knows that when a work is done it is done but that does not mean the idea is done. This allows him to create a series. This philosophy is evident in his work at his gallery as he talks about how one piece of art leads to another. He describes what he calls “Flashes!” or ideas, which enter into your mind that you follow with absolute faith. He feels the flashes of insight come from the right hemisphere and that it is the left that allows the flashes to come to life on the canvas. He stated, “The right brain sees the possibility and the left brain invites order allowing for the production of the art.“

Raggio made his way to Las Vegas New Mexico after the San Diego studio space he was renting was torn down. Within three weeks of being in New Mexico, which never felt quite right, Raggio decided to move to Trinidad. He explained, “I came in hearing you have to bring your own job, so I came with my pottery and began teaching classes.” (Something he plans to continue to do at his current location) In addition to his downtown space Raggio continues to work on larger projects at his home on Convent Street, which is lovingly referred to by locals as Ft. Raggio!

Raggio’s most recent collection is inspired by Trinidad’s art car festival, Artocade and can be viewed at his downtown gallery. This multi media series features blown out tires collected by Raggio himself off the side of the highway or have been given to him as gifts by

members of the community. For Raggio the collection serves two purposes; to remove trash from the highway and repurpose what others would throw away. “Abstraction is art as long as you allow it to be,” he said after talking with a man who dropped off a broken bicycle tire during the interview.

For Raggio, critics have never bothered him. He states, “If people love his art or don’t, it has at least elicited an emotional response and discussion,” which is all he hopes for. In addition to sculpture Raggio paints and writes poetry. When asked what advice he had for young artists he offered up a poem:
“A trend is for one to pretend, Just to be in style for just a while, Carry on in YOUR own way” –John Raggio
A legend is someone who lives life on his or her own terms; carries on in his or her own way. Raggio is legendary. He is that flash of genius.

Life’s Play on Words
the humor of Raggio’s artwork

Dedicated to amusing quirks, peculiarities, and oddities of the English language, Raggio’s art engages your senses in wordplay. Playing with words and language can keep you entertained and flexible. He sees to it that you ponder the art piece with an eye toward yourphysio-psychological wonderment. For example, “To vent oneself is to re-invent oneself,” exhibits your ability to say what you’re feeling, and thus makes you better able to find alternatives and solve problems.

The young man returned for a second and then third time, mesmerized by the piece of art. He was in his early teens, but his sophistication exceeded his years. He spoke very little, only asking Raggio for the price. He quickly left only to return for a fourth time. This time he had his father with him to make the purchase. Raggio recognized the distinctive voice of the legendary man before he saw the face of Bob Dylan. Dylan laid down the dollars and his son left, but this time, with the start to his art collection.