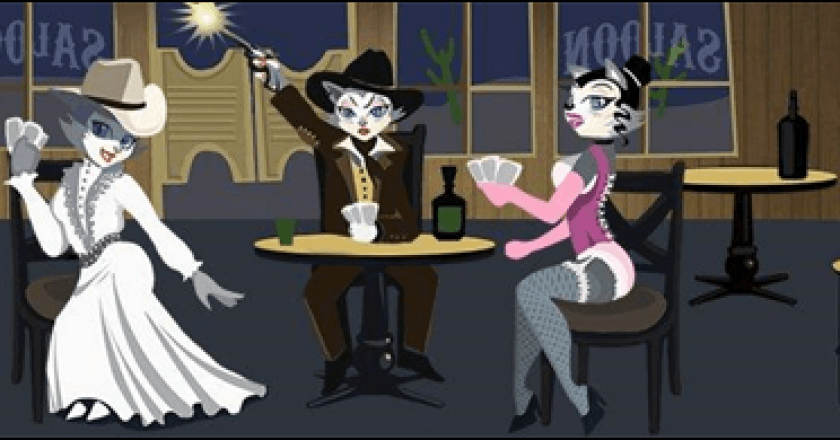 Cards and guns during the 1800s in North America was an everyday occurrence.  Everywhere one turned someone would be shuffling, dealing cards, or calling them.  It was a form of entertainment that cost many men their hard earned money and for others their lives, but let’s stop right there – did I say men?  Yes, men were the dominant gamblers at the card tables and it didn’t matter if it was a game of faro, blackjack or five-card draw.  There were the card sharks – professional card players; then there were the cardsharps – also professional card players, but with the ability to cheat at the table.

But stand aside men, these lady gamblers are coming through and they plan to run the tables on you.   Yes, that’s right, as there were many excellent lady gamblers at a time when it was wild and rough with many unsavory characters roaming the Southwest, but the ladies knew how to protect their own interest, relying on their 38 calibers, or the like thereof.  Getting smart with these ladies wasn’t in the cards as they too were very good at handling a gun; if all else failed, their long hair pins might drive home the point they wanted to convey – hands off.

There were many ladies that gambled and played cards, but the majority of the ladies were a bit more discreet, as their games were kept private.

Ladies at the card tables were few, but when one appeared most men wanted to play at their tables.  The ladies had higher odds for winning as the men would be distracted and the lady gamblers took advantage of that opportunity.

One of the great gamblers and one who was very good with a gun was Poker Alice.

Poker Alice (Alice Ivars Tubbs) (1851-1930) – Poker Alice was one of the best known female poker players that made the rounds during the days of the Wild West. Mining towns in Colorado were popular for gamblers and Poker Alice circulated through notably Trinidad, Georgetown, Central City, Alamosa, and other mining towns.

Poker Alice had everything going for her as she had come from Virginia where she had attended a girl’s finishing school, before heading west and winding up in Colorado.  Poker Alice was a beautiful lady with blue eyes, petite at 5’4” with nice brown hair. Poker Alice wore the finest of gowns from New York City and was a crowd pleaser. Her features were a plus when dealing and playing faro, blackjack or five-card draw.

During the 1800s, it appeared that circumstances had much to do with what options a lady had if they lost their spouse.  This was the case when Poker Alice’s husband was killed in a mining explosion.   Poker Alice was educated and math came easy to her in school, therefore she found gambling was her cup of tea, and a way to make a living.

In 1874, she visited Silver City, New Mexico and proved quickly that she was the best of the best when she sat down at the faro table.  Hand after hand, Poker Alice raked in the chips until she had taken in one hundred and fifty thousand dollars and broken the bank.

Poker Alice was one of the finest gamblers that made the circuit, but she was far from naïve when it came to safety.  Poker Alice had been taught by her father at the age of twelve how to shoot a gun, and she stood with the best of gunmen.  Her proficiency with a gun served her well at least three times during her gambling career.  Once a drunken miner pulled a knife at a gambling table, but soon became acquainted with a bullet from Poker Alice’s 38 caliber pistol.  Another incident at her home involved a couple of soldiers that were destroying her house; again Poker Alice and her 38 gained respect.

Besides being called Poker Alice throughout the West, residents in Deadwood, South Dakota referred to her as the Faro Queen of Deadwood.  In her later years of life, Poker Alice estimated that she had won a mere $250,000 during her lifetime at the card tables.

The life of Poker Alice is one amazing story and the late Elizabeth Taylor played her part in the movie titled, “Poker Alice.”

Bandit Queen (Taylor Hart) – Trinidad, Colorado was one of the favorite entertainment towns during the 1800s.  Around 1898, the train pulled in and Taylor Hart would go on to entertain the men as a saloon singer.

Hart moved to Phoenix and eventually to Tucson, AZ.  In Tucson, the Bandit Queen and a friend decided to rob a stagecoach.  Hart cut her hair short, put on some men’s clothes and carried a 38 revolver.  Hart was captured, but played up the part of a bandit and gained attention to the point of being named the Bandit Queen. The Bandit Queen would go to prison for 18 months for tampering with United States mail, but would receive extra perks from the warden in prison as her celebrity status continued.  The Bandit Queen would be the only female stage coach robber in Arizona history.

Other lady gamblers that had an amazing life at the card tables or on the western frontier were:

Through the years, some writers have written about some of these very intriguing ladies of the 1800s.  Not enough can be said about their lives at the card tables or with a gun.  Some went on to make lives for themselves in their later years, but many didn’t reach their later years.  When it came to lady gamblers, gun-toting ladies, madams or their soiled doves it appears that their professions demanded too much of the their good will and in doing so destroyed many of them though drugs, alcohol and poison.

So what did these professional lady gamblers have in common?  Answer:  They were all in it for the money and held the Aces in their hands, or should I say 3 Aces.  The 3 Aces were:
Saloons (alcohol), Card rooms (gambling) and Bordellos (ladies – soiled doves).