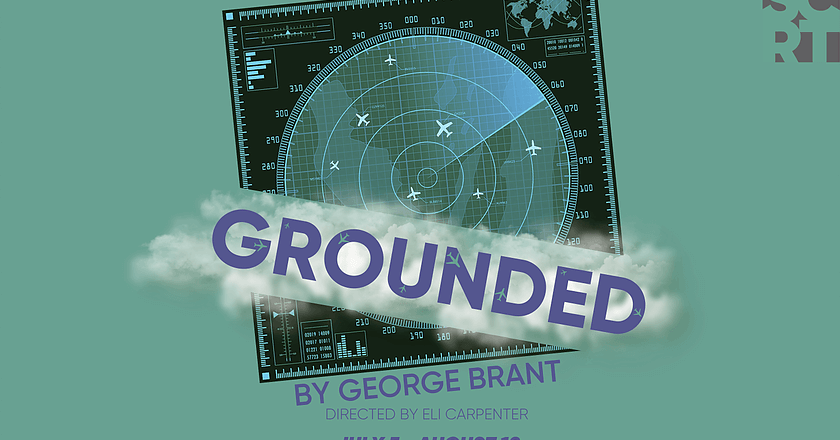 “Grounded” On Stage at SCRT

Even living in the 33 year stretch of US / Middle East Conflict, following current news and documentaries about the grueling nature of military operations give civilians a minimal understanding of what soldiers in uniform deal with physically and emotionally.

The Pilot (Walsh) takes the audience through her life and career, and leaves the audience emotionally wrecked by the end. The imagery that Brant uses to tell the story begins to blur together in the early parts of the story. It is a vital reminder of why we need to provide all sorts of health and psychological care for current members of the military and veterans. “Grounded” invites patrons to understand more about what the modern soldier deals with.

In the play, Walsh plays a woman who finds her meaning in life in flying, as she says, “to soar into the blue” as a fighter pilot. She carries out her missions with a sense of pride & exhilaration. While her plane rains bombs and missiles on targets throughout the Middle East, at attack altitude and speeds she never witnesses the results. She’s aware of what she’s doing but is far removed from the reality.

The Pilot’s life is turned upside down after a scheduled leave & romantic encounter. A pregnancy test, an ever-growing midsection, maternal fears for her unborn, and the risk of G-forces hurting her child our lead moves from cockpit to desk to civilian life. A soldier at heart, our lead doesn’t last long before re-enlisting. The U.S. Air Force reassigns her to a base outside Las Vegas, her only option to become a drone pilot monitoring a screen for 12 hours a day, seven days a week. She gets to go home to her husband and daughter every night and watch the little girl grow, but her work begins to take its toll.

Our Pilot finds she can’t turn off the job so easily. Her world becomes grey, the blue once loved disappears. Her beautiful daughter and loving husband take on the same drab gray of the screen she stares at all day as reality melts away.

The impact of her work on her life and family is part of what makes the play so harrowing. The fact that she can’t be doing what she really loves would be difficult enough, but we really feel for her and her husband, Eric, as they try to deal with not being able to handle a job without losing part of oneself.

Walsh maintains an invigorating pace to keep up with lights and sound effects as she utilizes the small stage & light cube to its fullest. The sand was a nice touch, but the actress doesn’t need anything more to take us along on this emotional ride.

While other productions of Grounded may have a more elaborate setting or technically complex projections, the simplicity of SCRT’s production using timing, light and sound made for a fantastic and immersive show.