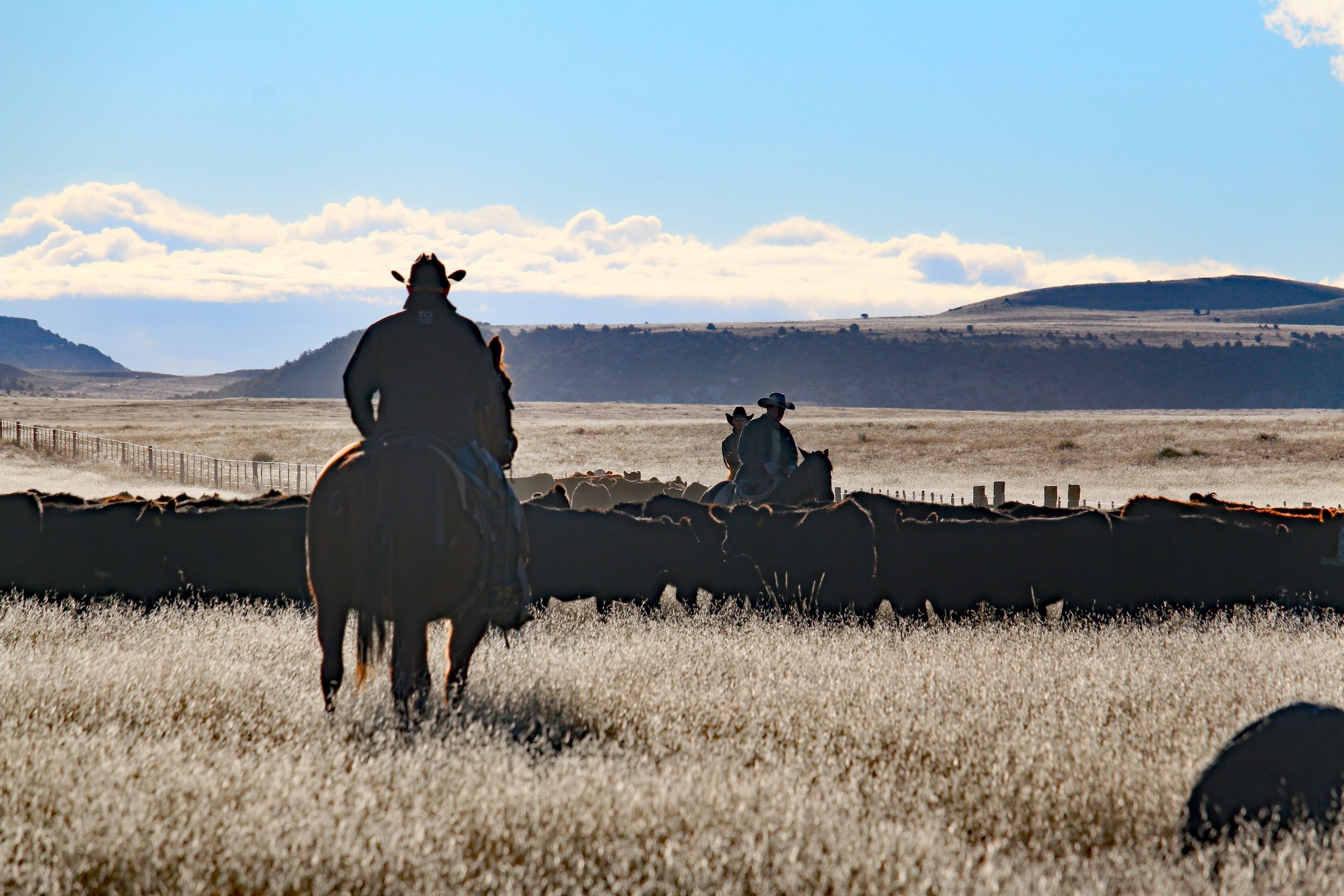 TO Ranch & the Cowboys 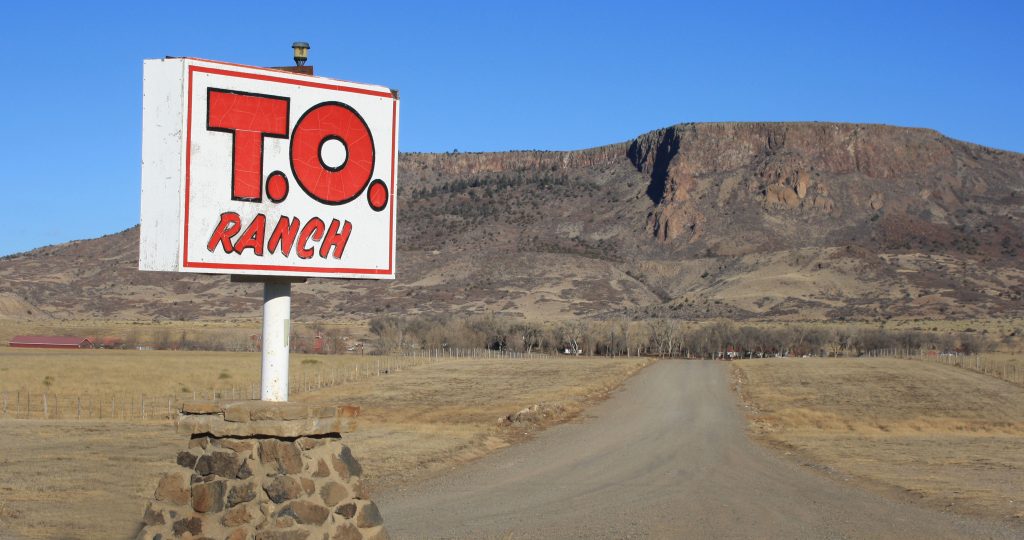 The TO Ranch located east of Raton, New Mexico in Colfax County has large land holdings. The TO Ranch is a prime example of what has transpired from the 1600 Vaqueros to a working ranch that dates back to 1864.  The ranch offers both mountain and prairie grass lands with mountain springs.  The cowboys that work the ranch remain flexible in their day to day efforts; mornings might find them working cattle in the flat plains, but evening could see them in the lower pinon or even upper mountain aspen range (all depending on the time of year and the cattle at hand).

The TO cowboys themselves are high endurance as they themselves come from quality stock, (parents that knew the meaning of hard work).  The cowboys are flexible dudes for they will bend, but not break.  A bit of southern manners always assures them another bowl of chili beans or chuckwagon stew when the ranch triangle ringer breaks the silence of the evening.  The finest of gourmet cooking never stands a chance against good Dutch-Oven cooking.  Take Dutch-Oven cooking one step beyond – prepared on a Charles Goodnight designed chuckwagon (the chuckwagon goes back to 1866 and the blazing of the Goodnight/Loving Trail).

Old Cowboy – The reality of the early cowboy and his life on the plains – his life was far from fashionable as Hollywood has portrayed them.  A bedroll that consisted of a couple of blankets and his daily diet that came down to biscuits, beans, salted beef, coffee and dried fruit, and possibly some dried vegetables.  The introduction of the Goodnight chuckwagon in 1866 improved the daily meals on cattle trail drives, but evening still found the trailing cowboy sleeping on the ground.

There‘s no denying that working a cattle ranch is hard work and takes daily commitment from all ranch hands.  From the first cup of range coffee at day break to that bucket of feed for that hard working quarter or paint horse at the end of the day.  The chuck wagon cook was a key figure on the open range for he catered to the trailing cowboys in sickness or in health.

The cowboys can spend long days in the saddle, but at the TO Ranch all are family and all share a common bond as they soothe their aching muscles after a long day in the saddle.

The cowboys on the TO Ranch as it really is:

December – February:  The cowboys day starts before sun-up (around 5 in the morning if not before).  A cup of coffee and a quick bite to eat and he’s off to the corrals.   The cowboy greets his horse by running his hand over its mane and bringing over a bucket of grain for his 4 legged friend as he grabs his blanket, bridle and saddle.  Now the cowboy is ready to ride out to the cattle or he may load his horse in a trailer to be moved to a remote area of the ranch.

If cattle are being moved to a new pasture, or heifers are being moved closer to the ranch for calving or branding, one can expect that the cowboy will spend a long day in the saddle.  During calving season, it’s a 24 hour day for the cowboys as the young heifers are monitored around the clock.  In snow blizzard conditions or in freezing rain the young born calves and mother will be taken into the barn or other protective shelter.  Calving season is a busy time and the cowboys always stand ready to deliver a new born calf.  A cowboy is part veterinarian for he works in conditions that are sometimes less than ideal when tending to injured cattle.

March – April:  April is branding time and again the cowboy is up before sun-up.   Out to the cattle he rides as the branding irons are being heated.  One cow after another are lassoed and taken to the ground.  Branding is a fine art, and those that have demonstrated that art will take the lead in branding.  It’s a long dusty day, but with all the action, time flies, and before long it’s time to grab a bite.  The day or days goes on until all the new calves are branded.

May – Sept:  Some cattle are moved into the high elevation while others may remain in the lower grass lands.  The TO Ranch is blessed with excellent blue grama grass along with other forages.  Cattle are closely monitored for health purposes as there are poisonous plants that arrive in spring before the grasses.   Bloating along with other symptoms in cattle, if not detected early, will kill them.

Sept – Nov:  It’s time to bring the cattle out of the high mountain range and locate them in the lower pastures and grasslands.

The life of the cowboy – The day could be young and bright, but the distant clouds can bring rain and more.  It’s the more that will earn the cowboy his money.  The evening rain is a welcome relief, but the lightning and surely the thunder is a sign of alarm as cattle become restless.  A stampede could scatter the herd over miles on the high plains.   The cowboy and his pony are in eminent danger as they attempt to turn a stampeding cattle herd.  The cowboy always stands ready for whatever the day might bring, for this is his livelihood.

In recognition to George McJunkin – One of the best bronc riders, ropers and cow hands was an ex-slave by the name of George McJunkin from Folsom, NM (Folsom a few miles east of the TO Ranch).  George became known as one of finest cowboys that worked the Pitch and Crowfoot Ranch.  George went one step beyond being an amazing cowboy for he discovered a large fossil in a wash after the Folsom Flood of Aug. 27, 1908.  George discovered a large bone of a large bison that was protruding from the banks of the Dry Cimarron River while he and a friend were riding their horses on the Wild Horse Arroyo.  In 1920, excavation continued in Wild Horse Arroyo.  George McJunkin died before the amazing excavation of 1925 found Folsom Points in the excavated fossils.  The Folsom points were evidence that the Folsom Man (a nomadic hunter that dates back 10,000 years) used spears to hunt, and established a new time line as to when Native Americans arrived in North America.

Many thanks go out to Brad Long, (manager), and to his dad Roger Long of the TO Ranch for sharing the past, and present history of the ranch with me.  Thanks goes out to Jason Magill, Mark Wheeler and Tanner Sorrels (3 cowboys) of the TO Ranch that shared their working history.