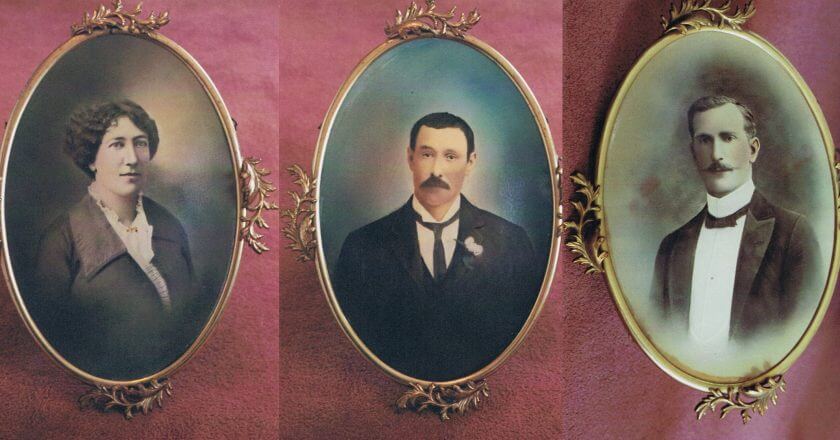 Kate! Doc! Is That You? “The Complete Story”

In 2007, retired aircraft engineer John Bullock was perusing the contents of a “Trash and Treasure” market near his home in Australia when two portraits caught his eye. The matching gilded brass frames with convex oval glass were obviously antique, and Bullock thought that they would go nicely in his 1826 home. The seller said they came from a farmhouse in nearby Huonville. Bullock, who mostly wanted the portraits for their impressive frames, scored the pair for about $100.00 USD.

The subjects of the colorized portraits proved quite intriguing, and even seemed vaguely familiar to Bullock. One night, according to Bullock, he had an epiphany that caused him to sit bolt upright in bed. The portraits, he realized, bore a striking resemblance to the famed John Henry “Doc” Holliday and his paramour, “Big Nose Kate” Haroney. After consulting a book containing a picture of Holliday, Bullock was sure he had made a most interesting discovery.

For years now, Bullock has continued researching the portraits in hopes of authenticating them. Local inquiries yielded nothing, so he began consulting with American historians. The initial responses were apathetic at best.

“It seems that many of the people I am trying to communicate with are not interested in helping me with this project, but will not tell me why,” he wrote in 2008. “Perhaps they think it is a hoax or too good to be true.”

Bullock refused to give up. Inquiries were made to historical societies, libraries, museums and historians in California, Arizona, Colorado, Georgia, Missouri and Texas. Notable contacts have included Doc Holliday biographers Glenn Boyer, Robert McCubbin, Gary Roberts and Karen Holliday Tanner, as well as numerous other researchers and historians. The responses have ranged from positive to doubtful.

Closer to home, Bullock also sought the professional opinions of experts in Australia. One of them, Anatomy Prof. Maciej Henneberg of southern Australia’s Adelaide Medical School, compared the portraits with known photos of Kate and Doc and confirmed Bullock’s suspicions. Other consultations were made with Pinnacle Times, a division of the Queen Victoria Museum in nearby Launceston, and the Tasmanian Photographic Museum which identified the portraits as albumen prints circa 1870—1880.

Bullock’s quest for the truth intensified in 2011 when he found a third portrait of Doc’s cousin, Robert Holliday, at Gowans Auction House in Tasmania. Robert’s portrait has an identical frame and similar markings on the back, including a penciled inscription indicating it possibly was taken on June 23.

“Our vendor says she got it from a tip shop,” Gowans emailed from Australia, “but that’s all she knows.” In Australia, “tip shops” typically sell items rescued from the garbage.

Findings like Bullock’s are not unusual. In 1989, a Pennsylvania man found an original copy of the Declaration of Independence hidden in a $4 flea market frame. In 2011, a rare tintype of Robert E. Lee surfaced at a Goodwill store in West Virginia. Most recently, a previously unknown image of Billy the Kid was purchased for $10 at a flea market in North Carolina. In Bullock’s case, there is one important issue to be resolved.

Bullock believes that William Staples, an itinerant photographer who lived in Holliday’s hometown of Atlanta, Georgia in 1876, may have taken the images. Staples had his studio about a year, according to Atlanta historian E. Lee Eltzroth, who noted that between 1868 and 1892 Staples worked in North Carolina, Mississippi, Alabama, Texas, Indiana and Tennessee before disappearing in 1893. Staples also rendered crayon portraits under the Ideal Crayon Company. Still,..

Only at NewLegendsMag.com – The Cliffhanger Continues.

Nobody seems to recognize the I D Co stamp on the back of the portraits.

“That mark is not at all familiar to me,” says Eltzroth. “Of course [they] could have been done in Atlanta, but if so, I think it was done by a company not here too long.”

The most important question about the portraits is how they got to Tasmania. The chances that the portraits remained with Kate after Doc’s death in 1887 are slim.

Throughout her life, with and without Doc by her side, Big Nose Kate was a travelin’ gal. Her journeys took her all throughout the west, including stays in Trinidad California and Las Vegas, New Mexico. Hauling around three large portraits with fragile glass in them would have proven cumbersome. Bullock’s portraits appear to have been handled very little, indicating they likely spent a lot of time in storage.

Bullock believes the portraits may have left the Holliday family just after Robert’s death in 1906. Family members, some of whom were ashamed of their famous kin, may have discreetly disposed of the portraits, or even pawned them for the price of the valuable frames. How they came to Australia still remains a mystery for now, but Bullock remains hot on the trail of anyone who may provide a clue as to the portraits’ origins.

“I intend to keep them and give them to my children so I hope they will be around with me for years to come,” he wrote in 2009.

In the meantime, Bullock, along with numerous historians around the world, remain hopeful that someone will eventually be able to shed light on two of the West’s own Tasmanian devils who made the annals of history in America—and now Australia.