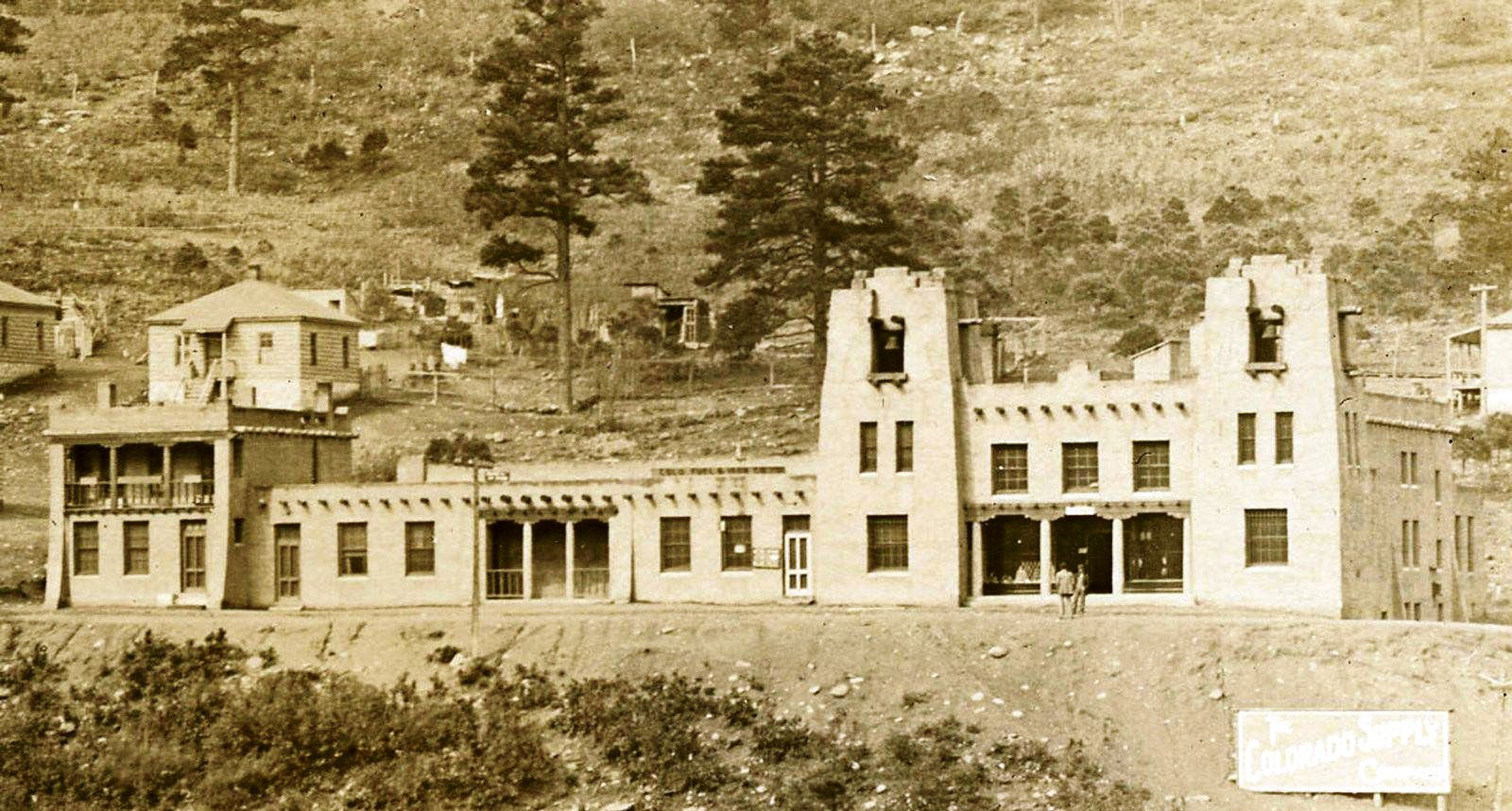 Cover photo Caption: This postcard shows the impressive Colorado Supply Company store, one of the most beautiful company stores of its time. Courtesy Jan MacKell Collins.

The mountainside ruins of the old church some twelve miles south of Trinidad, Co have been intriguing travelers by car and train for several decades. Situated high above Interstate 25 as it winds through Raton Pass and into New Mexico, the front of the structure has stayed intact long since the church closed in the 1950’s. Even the wooden cross above the arched doorway has survived the elements, a weathered but willful sentry. This is the last remnant of the coal-mining town of Morley, although the area’s history actually dates clear back to the 1700’s.

In 1719, after crossing Raton Pass, New Mexico governor Antonio Valverde y Cosio gave such a frightening account of his trip over “Cima” (Spanish for “summit”) that few others dared try it for many years. Two notable exceptions were Stephen Watts Kearny’s army in 1846 during the Mexican American War, and the group of Colorado Volunteers sent to engage in the Battle at Glorieta Pass during the Civil War in 1862. Not until 1866 was a wagon road finally built over the pass as part of the Santa Fe Trail’s Mountain branch. Pioneer Richens Lacey Wootton helped complete the road and built a toll station near the summit.

Wootton was doing great by 1878 when the Atchison, Topeka & Santa Fe Railroad (ATSF) approached him about laying tracks over Raton Pass. The Denver & Rio Grande Railroad had the same idea, but it was too late. The ATSF beat out the D&RG and, headed by engineer W.R. Morley, built the railroad as one of eight stations along the “Raton Pass Line.” The camp housing some 60 railroad workers was called Morley in the engineer’s honor when the post office opened in 1881, with August Wagner as postmaster. There was also a two-story depot, a section house, a water tank with pump houses, and a turntable for the trains.

Most unfortunately, W.R. Morley accidentally shot himself while in Mexico in 1883 and subsequently died. Two years later Morley’s post office closed, and by the late 1890’s most of the town was deserted when the Maxwell Timber Company moved in. Morley briefly made the news in April of 1900 when a bad snowstorm stopped the train due to a blocked tunnel, requiring a return to Trinidad so passengers could have breakfast while they waited out the storm. And in November, two men engaged in a fight over a woman, with one shooting the other. But not much else of note took place until 1906, when the Colorado Fuel and Iron Company (CF&I) bought up the old Morley camp.

Although CF&I chiefly produced steel and iron beginning in 1892, the company was floundering when it was taken over the John D. Rockefeller Jr. in 1903. Under him, CF&I began exploring for coal and the area around Morley was rich. The Morley Mine was built by the company in 1906, and the camp above it was expanded to create a town with tidy company housing and buildings. The post office reopened, and in 1907 an official state highway was built over Raton Pass. The following year, the Colorado Supply Company—CF&I’s own company store—was built at Morley. It was quite an impressive building, designed by accomplished architect Isaac Rapp and modeled after the beautiful Ancient Acoma Indian Church in New Mexico.

If Morley’s Colorado Supply Company was unique, so was St. Aloysius Catholic Church which was built around 1908. The church was only the second house of worship to be built in a CF&I town, the first being located at Berwind north of Trinidad. The building cost totaling $2,300 was supplied by both CF&I and donations from local residents. But despite having a beautiful church overlooking the town, things were not always peaceful at Morley. There are myths, such as the one about a mine explosion that killed 300 miners. That didn’t happen, although it is true that an unusually high amount of methane gas in the Morley Mine prevented workers from extracting coal with anything except good old fashioned mule power. There was, however, an all-out brawl among the miners in 1908 that resulted in a fatality or two and numerous injuries.

A look at census records for Morley reveals a virtual bouquet of residents whose surnames range from white to Mexican, from Italian to Spanish. Together, miners from these nationalities toiled in the mine. In time, unfortunately, certain workers felt that CF&I favored some miners over others because of their nationality. Inevitably, arguments sometimes turned into fisticuffs, and it all came to a head on a September night in 1908. Some 50 men scuffled on the streets, and before long “knives, guns, clubs, stones and other weapons figured in the affray,” according to the Fort Collins Express. Citizens cowered in their homes, wary of the bullets flying around outside. By the end of it one man was dead, and another was believed mortally wounded. A short time later, CF&I hired constable Frank Vance to patrol the town.

Although the services of Vance (who also served as Justice of the Peace), the Colorado Supply Company and a barber were available to Morley’s residents in 1910, few other amenities were. There were an estimated 860 people calling Morley home, yet the school only catered to students up to sixth grade. Children wanting to attend high school were bussed to Trinidad. But the Morley Mine did well, producing some 600 tons of coal per day. And although miners were often paid in company-issued scrip to buy what they needed, the store provided groceries as well as clothing, gasoline, and household items. The population remained around 900 even during the Great Depression but would not survive the 1940’s well.

By 1949, CF&I was in trouble. The Morley Mine was producing less coal and despite being a great tourist attraction, feeding and caring for 150 top-quality mules was expensive. Labor disputes were proving costly too and beginning in 1950 CF&I began laying off workers. The layoffs continued until 1956 when Morley’s post office closed a final time. Only twenty families were left by April, most of them waiting for their children to finish the school term in May. After the last resident left, and following the official closure of the Morley Mine, CF&I demolished the company housing and buildings to prevent squatters and trespassers. The one exception was St. Aloysius Church, which the demolition crew felt would be sacrilegious to destroy.

In the end, a demolition team’s sentiment is the reason St. Aloysius still looks over the ghost site of Morley today, even as the world around it has changed. In 1961, Raton Pass was made a National Historic Landmark. But a 2008 effort to turn Morley and the land around it into a bedroom community for Raton and Trinidad was unsuccessful. Another effort was made in 2011 with the promise of rebuilding the church and making Morley a tourist attraction, but residents objected to such an imposition on their privacy. The town remains privately owned and still comes up for sale now and then but for now, Morley’s ruins remain silent under the shadow of its historic church.