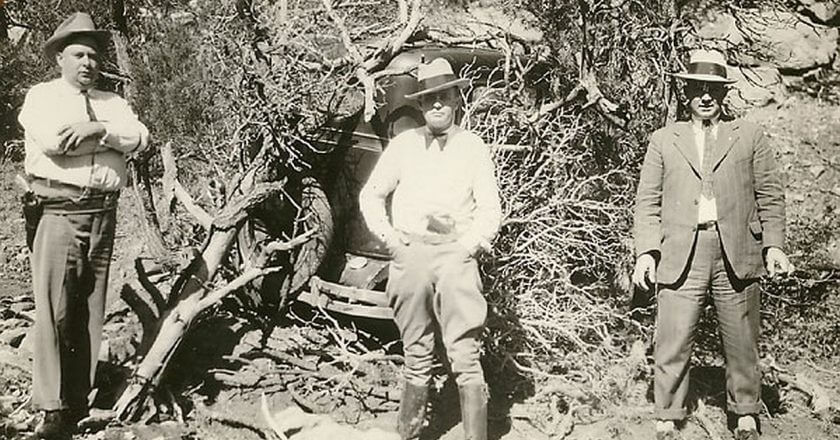 On the afternoon of August 28, 1930, Colfax County Deputy Sheriff Boots Fletcher of Raton, New Mexico, passed ATF Agent Ray Sutton on the highway about seven miles south of Raton. He would be the last to see the Prohibition agent alive. Astonishingly enough, it would be a full week before law enforcement began an investigation into the mysterious disappearance of Ray Sutton.

Prohibition Agent C.U. Finley was the lead investigator in a group that was comprised of various officers and volunteer citizens who coordinated the search for Sutton. Finley reported that “50 automobile loads of men from Clayton and northern New Mexico joined in the search for Sutton’s body.”

US Prohibition Agent Ray Sutton was born in Woodward County, Oklahoma Territory in 1873. At the age of 37 Sutton, a rancher, was appointed sheriff of Ellis County, Oklahoma. Two years later re-elected and then again  re-elected in 1914. Sutton moved to New Mexico after leaving office in Oklahoma where he was elected sheriff of Union County in 1916 and re-elected in 1918. While serving the county of Union, Sutton also engaged in the banking business, eventually becoming vice president.

On January 18, 1920, the 18th Amendment to the US Constitution‚ the Volstead Act‚ went into effect across the country. The new law made the manufacture, transportation, as well as the sale of alcoholic beverages illegal in the United States. To enforce this new law the Prohibition Bureau was created within the US Department of the Treasury. Ray Sutton joined this new Prohibition Bureau soon after its creation.

Agent Sutton’s territory as a federal agent covered the five northeastern New Mexico counties. His operated his headquarters out of his home in Clayton, but was often away overnight in various towns across his assigned area. It was in this capacity that Sutton was staying at the Seaberg Hotel in Raton on August, 28, 1930, the day Deputy Sheriff Fletcher spotted Sutton on the side of the highway. It was later learned that Sutton was scheduled to meet with Trinidad Police Officer Oscar Vanderberg on that date. The two were to work in the Raton Pass area investigating a ring of bootleggers and searching for illegal whiskey stills.

Deputy Sheriff Fletcher reported that Sutton was standing alone along the highway by his government-owned Pontiac sedan. Fletcher said he “gave Sutton a friendly wave, and he waved back” and Fletcher motored on. The following evening, when it was discovered Sutton’s daily report had not been received, officials became concerned. Colfax County Sheriff Al Davis was asked to search Sutton’s room at the Hotel Seaberg in Raton, New Mexico. The sheriff found Sutton’s clothing, including his topcoat, his personal items, as well as his working government records. Further, it was discovered that Sutton had not checked out of the hotel.

A few days later, Charles Stearns, district director of the Prohibition Bureau in Albuquerque, grew concerned when Sutton failed to appear for a district court hearing in Clayton. Stearns contacted Sheriff Al Davis who called Mrs. Sutton in Clayton and inquired as to her husband’s whereabouts. Mrs. Sutton replied that she had not heard from him in several days.

Now the officials were dealing with a missing person and the investigation intensified. Sheriff A. W. Turner of Union County joined the investigation. On September 9, Agent Finley discovered that Sutton’s government expense check for the month of July, in the amount of $152.35, had been cashed on Sept. 1, at the Harvey Eating House of the Santa Fe Railroad Depot in Trinidad, Colorado. Further investigation revealed that the check was cashed by a man representing himself as Ray Sutton and presented Sutton’s Masonic identification card and a Masonic ring as proof. Finley and other colleagues knew Sutton wore such a ring on his left hand.

Agent Finley was able to track down the man who cashed Sutton’s check, a Trinidad local named James Perry Caldwell. The endorsement on the back of Sutton’s check was compared to Caldwell’s signature on weigh sheets from the coal company where Caldwell worked. The handwriting was identical and Finley had his man. Acting on a hunch, as Finley knew that Sutton always carried a lot of cash and gold coins, he was able to recover two 20 dollar gold pieces, approximately $115 in cash and Sutton’s Masonic ring. Perry Caldwell was arrested and charged with forging Agent Sutton’s check.

On October. 18, 1930, a cowboy by the name of Rafael Zamora found Sutton’s government issued Pontiac sedan. It was hidden in a deep arroyo near Koehler Lake, southwest of Raton. Driven between two pinon pine trees and covered with brush, the vehicle was well concealed, and travelers along the nearby highway could not see it. Even an earlier search of that area had not discovered it.  Searchers hoped the body would be found near the car. It was not.

Fingerprint experts went over the car, however rain showers had done much to wash away any evidence. Investigators surmised that Agent Ray Sutton had not been killed in the car, but his body had been placed in the vehicle and taken to an area for disposal. The report read that the vehicle was: “Secreted in a distant canyon 20 miles from Raton, and covered with various bloodstains.”

All officers involved in the investigation, from the prohibition officers, local and state officials, as well as the U.S. attorney, believed that Ray Sutton had been murdered, and his body disposed of in any number of ways.

During the now murder investigation, Agent Finley learned that the head of the moonshine bootleg ring in northern New Mexico, headquartered in Raton, had offered Caldwell $500 “to make way with Agent Sutton.” However, without Sutton’s body, this new evidence was not strong enough to charge James Perry Caldwell with murder.

A federal grand jury indicted James Perry Caldwell on December 8, 1930, with forgery, and he was tried in Pueblo in January, 1931. The witness who originally claimed he saw Caldwell cash Sutton’s check refused to identify Caldwell in court. The passing a false check charge was dismissed. On the forgery charges, expert witnesses testified that the signature on the check was not that of Ray Sutton‚ but was a forgery. Nevertheless, after nearly 20 hours of deliberation, the jury acquitted Caldwell. It was believed that members of the Northern New Mexico bootlegging ring had intimidated witnesses as well as jury members.

Agent C.U. Finley continued to follow leads on Sutton’s disappearance for more than ten years. He once said:

“If the mysterious disappearance of Agent Ray Sutton was not followed up and the perpetrators of the crime vigorously prosecuted, agents in this part of the country would simply become the prey of the moonshiners whenever it is necessary to avoid the penitentiary.”

The mystery of what happened to Prohibition Agent Ray Sutton remains unsolved to this day. Sutton’s body has never been found, making him the only government agent in the state still missing in action. Sutton was survived by his wife and two children.