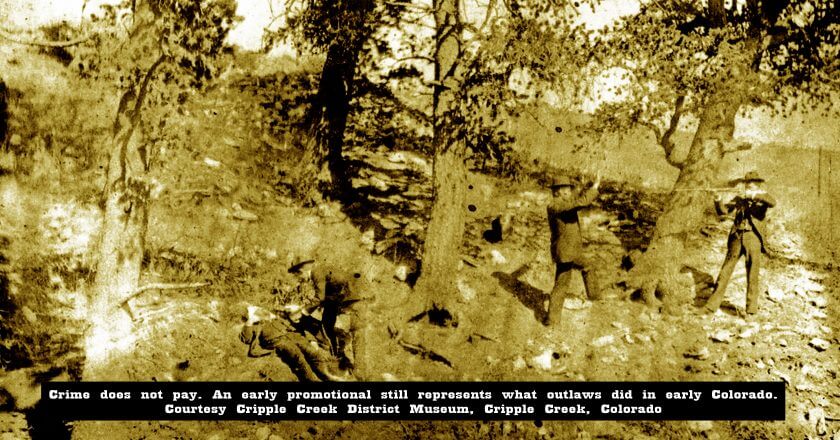 The Murders of Deputies Green and Kelly

On July 30, 1897, the Fort Morgan Times published information regarding a long-posed question: whatever happened to Las Animas County deputies William Green and William Kelly? Over a year before, the men had departed Trinidad in search of some cattle thieves, only to disappear without a trace. Authorities, locals and even Green’s own brothers had worked diligently trying to find out what became of the men. At last there was an answer, solving “the greatest murder mystery in the history of this part of the country.”

The story began back in April of 1896, when local cattlemen had started filing complaints after “suffering heavy losses” around the San Isidro mountains southeast of Trinidad. The suspects were comprised of a gang led by one Miguel Reville, who remained on the lam. Deputy Green, “known to possess plenty of nerve, and who had the record of placing under arrest more desperate criminals than any other man in the territory”, secured a warrant and set out for Reville along with Deputy Kelly, “also a man of nerve.” The men departed Trinidad on April 20th and were due back by the 26th. They were last spotted at a place known as Barela Station but were never seen again.

Authorities were puzzled over the disappearance of the deputies. Meanwhile, Ely and John Green, brothers of the missing deputy, were determined to find the men. The pair even relocated from the family home in Las Vegas, New Mexico to Trinidad and set up a business, using their profits to search for the deputies. Throughout the summer and into the winter, the men, along with other law officers, searched high and low for the missing men, as well as Reville. It was well-known that the gang leader and his cronies disliked Green intensely. Back in 1895, he had caught gang members Leandro Martinez and Pedro Baca after they murdered one Charles Allen at Starkville. Those two killers were serving forty-year sentences at the State Pen in Canon City.

The Green brothers and the Las Animas County sheriff’s department kept up their search, following only a few scant clues. When a report was received that two bodies were found in the San Isidro area, the party conducted a search but found nothing. The men also kept a close eye on Reville’s gang. At last, in July of 1897, the Green brothers received information from someone in Raton that one of the gang members, Macedonio Archuleta, had lots of information about Deputies Green and Kelly—including the fact that they had been murdered.

Very quickly and very quietly, the Sheriff’s office arrested Archuleta. The arrest was kept a secret, until the outlaw finally gave the officers a full confession. According to the prisoner, four men—Nestor Martinez, Moses Frayter, Juan Duran and Reville—had been instructed by the gang leader to ambush the deputies. Green and Kelly had apparently found a small settlement where the gang hung out. After killing the officers, the men buried the bodies for three days before digging them back up and burning them. Only a few charred bones were recovered from the site. What became of the men’s horses, saddles, firearms and badges remains a mystery to this day.

With Archuleta in jail, sheriff’s officers were able to wrangle the rest of Reville’s gang. Taken into custody were Martinez, Frayter and Duran, as well as Dave Hodges, Rupeito Archuleta, Juan Pacheco and two women, Lucia Duran and Lucia Archuleta. The ladies were especially helpful, later testifying about statements the men had made after the killings. Additional names were provided and more men were arrested. Authorities were hopeful of finding Reville as well, until Macedonio Archuleta revealed that the leader had been killed by other gang members, three days before Deputies Green and Kelly had even gone looking for him.

Still, Reville’s eventual demise remained confusing. Archuleta said the killing was done by other gang members. The Fort Morgan Times stated that Reville was killed by a Mexican neighbor “for undue intimacy with his wife.” Another report stated Reville was killed in November of 1896 by a Texas Ranger near Childress, Texas. In the end, it didn’t matter much how Reville died, but it meant everything to the Green brothers and everyone else that he was indeed dead.

Of everyone arrested in connection with the death of Green and Kelly, five of them were convicted and sentenced to death. The prisoners were sent to the State Penitentiary, where their sentences were later commuted to life imprisonment. In the end, Rupeito Archuleta and Juan Pacheco died in prison in 1899 and 1901. Nestor Martinez was inexplicably pardoned in 1899. The last two prisoners, Juan Duran and Moses Frayter, were paroled between 1911 and 1913.

Today, the memories of Deputies William Green and William Kelly are preserved on the Colorado State Patrol’s “Colorado Fallen Heroes Biographies”, a record of every officer killed in the line of duty since 1860. Their stories can be accessed at the State Patrol’s page Here.