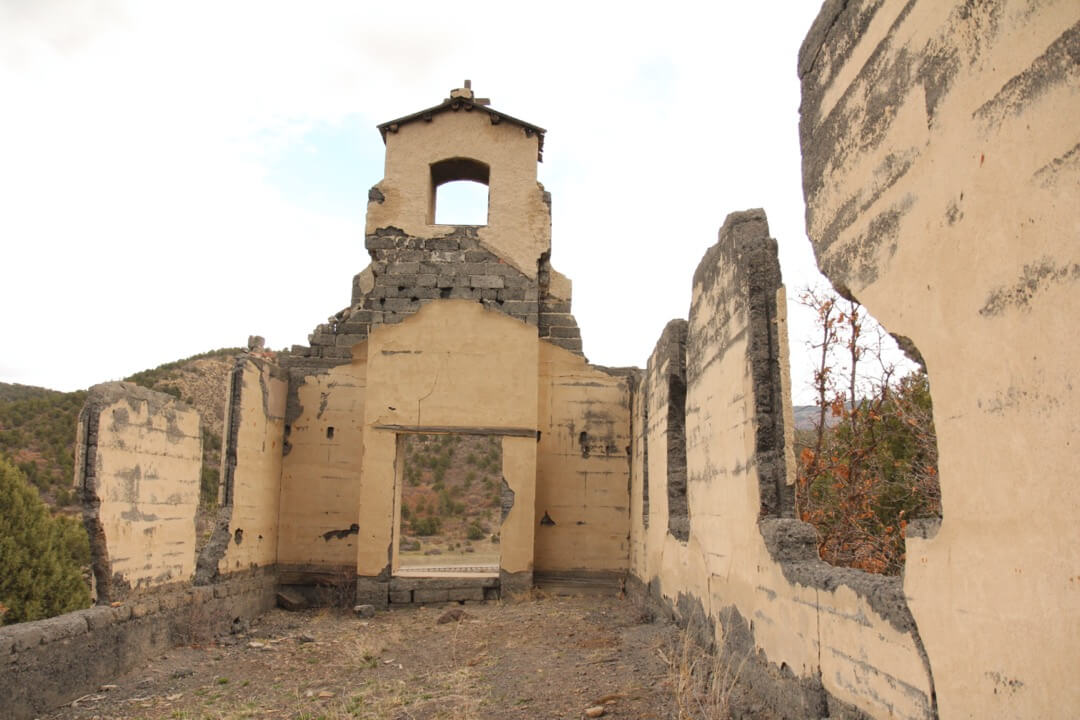 What’s hidden in the shadows of Southern Colorado and Northern New Mexico? Let’s take a look-see at the strange and creepy things tucked away in dark corners of the state. From spooky ghost towns to haunted hotels, Colorado & New Mexico has a lot more than meets the eye so we’ve compiled a list of some strange & creepy places within the region.

Disclaimer: Some of the places on the list may be on or near private property. If you visit these sites, please be respectful of people’s property and do your own research before wandering out to these locations.

On highway 38 between Red River and Eagle’s Nest, you may spot some old ruins of a town now abandoned. This once thriving mining town was called Elizabethtown and during its peak in 1870, it boasted a population of around 7,000, mostly consisting of miners working in the nearby gold & copper mines. You wouldn’t guess it by an initial glance that this place was once home to a ruthless serial killer.

This town was once home to Charles Kennedy, an infamous serial killer who killed at least 14 weary travelers passing through the town. Charles would entice victims by luring them into his cabin by offering a free meal. It’s there the unfortunate travelers would meet their fatal end.

You can drive through the town and see remnants of the old buildings where Charles Kennedy used to roam, searching for unsuspecting victims. There hasn’t been any reported haunting in the town, but that’s no reason not to be careful as you never know when Charles Kennedy might strike again from beyond the grave.

Tucked away in the New Mexico foothills on Route 56 Near Springer is the infamous Dorsey Mansion. This Victorian mansion has some quirky architectural aesthetics including a castle-like turret in the front of the property that’s surmounted by Gargoyle statues. In total the mansion hosts 36 rooms, a massive dining room that can host up to 60 people, and a swimming pool. The mansion was owned and constructed by republican senator ​​Stephen W. Dorsey in 1879. It’s rumored that Dorsey was able to pay for the mansion’s construction through a corrupt political scheme where he exploited an estimated $400,000 from the US postal service by bribing officials to create fake delivery contracts. Once everyone caught wind of what Dorsey was doing, his reputation plummeted and he ended up moving out of the mansion and converting it into a tuberculosis sanatorium.

Strange Occurrences in the mansion

Strange paranormal activity has occurred in the home. The Mansion was featured in an episode of Scariest Places On Earth in 2000, where it’s reported that many groundskeepers keep getting harassed by spirits. One property caretaker abruptly resigned from working in the mansion after almost getting pushed down a flight of stairs. No one knows the source of the paranormal activity within the mansion, but caretakers did find a skull in the bottom of the basement with a bullet hole through it. Could this be a murder victim now haunting the home for revenge?

The old episode of Scariest Places On Earth featuring the Dorsey Mansion can still be found online:

The Mansion is now privately owned and unfortunately it’s not open to the public at this time.

Anyone who’s driven through Raton pass has probably seen the infamous church ruins that perch upon the Colorado countryside right beside I-25. This is what is left of the town of Morley. Situated between Raton, NM and Trinidad, CO, this small outpost was first established by the Santa Fe Trail Mining Company in order to house their railroad workers. Later on it became a mining town for Colorado Fuel and Iron Company where miners would extract coal to transport to the steel power plant in Pueblo, Co . Morley became a ghost town in the 1950s after the mine closed down and all of its inhabitants left to find work elsewhere. All that remains today are ruins of old building structures. Morley’s most iconic landmark is the remnants of an old church (pictured above) which can be seen while driving along I-25. If you walk among the ruins of Morley, listen well for the miners who once called this place home. They may still be there…

Many claim that the Town of Dawson, New Mexico, may be one of the creepiest ghost towns in America largely due to one of it’s last remaining significant landmarks: Its cemetery.

Like many other towns in New Mexico, Dawson was once a thriving mining town owned by the Phelps Dodge Corporation in the early 1900s. The town was built up for the sole purpose of housing miners for the surrounding 6 mines in the area. Disaster struck the town on October 22, 1913 when a dynamite charge ignited the coal dust within one of the mines. Out of the 283 miners who were working the mine that tragic day, only 23 survived.

10 years later, yet another mining disaster would take the lives of an additional 123 miners from a second accidental explosion.

The town is now mostly in ruins except for the large cemetery in the middle of a town, where most of the miners who lost their lives are buried. It’s a tragic reminder of the horrible disasters that changed the town forever. If you wander around the ruins of Dawson today, keep an ear open for the ghostly rustling of old miners still lingering around the town.

Disclaimer: If you visit the town of Dawson, please be respectful to the remaining structures and the cemetery that remains there.

The St. James Hotel in Cimarron, New Mexico is a historic hotel that has been referred to as the haunted house of the wild west. It was once a prominent hotel in the area. Guests can stay in its historic main building or in its modern addition.

The elegant mansion was originally built in 1872 by Henri (Henry) Lambert, who was the personal chef of President Abraham Lincoln. After finding little gold, Lambert moved west and settled in New Mexico. He opened a restaurant and saloon.

During its heyday, the St. James was a famous meeting place for notorious criminals and law enforcers. Many of them stayed at the inn, including Morgan and Wyatt Earp, who were on their way to Tombstone.

There were so many murders and shootouts in the hotel, a common expression at the time was “Who was killed at Lambert’s last night?”. During the renovation of the roof of the hotel in 1901, Henry Lambert’s son found numerous bullet holes in the roof. A double layer hard wood board was the only thing stopping bullets from killing anyone sleeping in the upstairs above.

The St. James hotel is considered to be one of the most haunted hotels in America. Because of it’s colorful past, the hotel seems to be a hotspot for paranormal activity. Many guests report strange noises, the smell of cigar smoke throughout the halls (even though it’s illegal to smoke inside), sudden temperature shifts, and many ghost sightings throughout the hotel. Room 18 in particular is rumored to be haunted by the ghost of ill-tempered Thomas James Wright, who was killed in his room right after winning the rights to the hotel in a poker game. Wright was shot through the door and bled out onto the floor. The malicious energy of Wright still haunts that room so much that the room remains locked most of the time and guests are not permitted to stay there overnight.