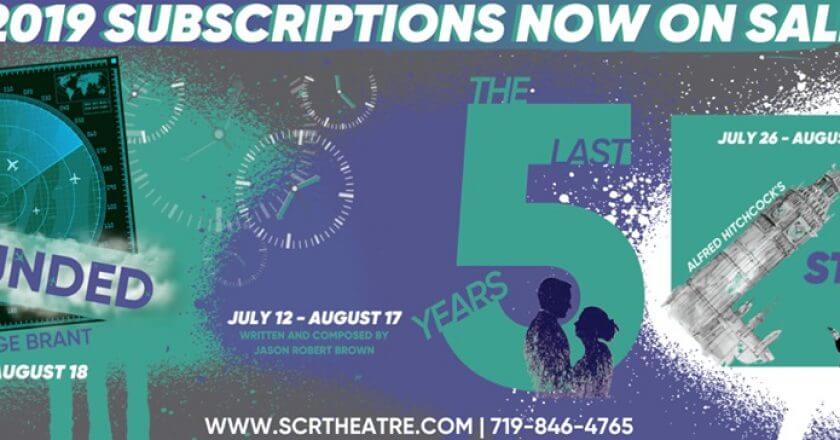 TRINIDAD, CO – The SCRT is proud to share the Professional Acting Company for the previously announced 2019 Summer Repertory Season. Under the Artistic Direction of Eli Carpenter, the season encompasses a complex psychological landscape, a musical full of love and loss, and a rollicking adaptation of a Hitchcock classic. Carpenter and the SCRT are thrilled to introduce the professional acting company from across the country who will perform in Trinidad this summer.

The season begins with the military play, Grounded by George Brant and will be directed by Artistic Director, Eli Carpenter. As previously announced, Grounded will star returning favorite from New York City, Kayla Ryan Walsh; this one woman show tells the story of an unnamed fighter pilot in the US Air Force who becomes pregnant unexpectedly, forcing her to stop flying. On returning from maternity leave, she’s co-opted into “the chair force” as a reluctant drone operator. After each shift, she drives home to family life, a process that becomes increasingly dislocating. The play delivers a ferocious journey, as the pilot’s state of mind unravels. Grounded runs July 5-August 18.

Kayla Ryan Walsh is delighted to return to SCRT after appearing in last summer’s season! Favorite regional credits include Fly By Night, Into the Woods, Hairspray, Nice Work if You Can Get It, God of Carnage, Blithe Spirit, and An American in Paris to name a few. She was an Acting Apprentice at The Shakespeare Theatre of New Jersey and received a Fulbright Scholarship to study Shakespeare at The Globe in London. Kayla and Alexander Sage Oyen will be releasing an album this fall, “Maybe Manhattan.” Go to www.kaylaryanwalsh.com and @kaylaryanwalsh to follow Kayla’s journey!

Next in the season is The Last Five Years directed by SCRT Associate Artistic Director, James Bruenger. The Last Five Year will star Johnny Link and Whitney Noelle both based out New York City currently, Noelle was born and raised in Littleton, Colorado. This piece of musical theatre, written by one of the most important living American composers, Jason Robert Brown, follows Jamie through the start of his relationship with Cathy, moving forward in time, while it follows Cathy after their relationship has ended, moving backwards. For one brief moment they meet in the middle of the show, as we see a glimpse at the momentary brush of balance in the relationship. The Last Five Years runs July 12-August 17.

Johnny Link is Chicago native residing in NYC. Credits include the national tour of R&H’s Cinderella, the US premiere Tim Rice’s From Here to Eternity, and Stepchild, a new musical collaboration with Deaf artists. Other roles include Marius (Les Miserables), Georg (Spring Awakening) and Starbuck (110 in the Shade). What an honor to be a part of this story!

To round out the season, the SCRT will produce The 39 Steps, a laugh-out-loud adaptation of Hitchcock’s classic movie by the same title. This production will feature a company of four stellar comedians, two of whom actually play clowns. The ensemble is led by Adam Marcantoni and supported by Linnea Scott, Patrick Monaghan, and the aforementioned Kayla Ryan Walsh. These riotous actors will have you streaming tears of laughter. The 39 Steps runs July 26-August 16.

Linnea Scott is a rising senior at the University of North Carolina School of the Arts where she will be receiving her BFA in Drama. She was raised in Denver and first discovered her love for acting while attending Denver School of the Arts as a theatre major. Some recent stage credits include Balm in Gilead (Darlene), The Things They Carried (Various Roles), Scenes from an Execution (Pastaccio), and Hamlet (Gertrude/Ghost). This is her second summer at SCRT.

Patrick Monaghan is very excited to be joining the SCRT team for the first time this summer. A native New Jerseyan, this fall he’ll start his fourth year in the B.F.A. acting program at the University of North Carolina School of the Arts. Previous Credits include; Regional: Midsummer Nights Dream (Bottom), As You Like It (Orlando), Lives of Reason (Jimmy) all with the Two River Theater Company. University: Balm in Gilead (Joe), Scenes from an Execution (Admiral Suffici), Othello (Iago).

Season subscriptions are available for purchase now at the SCRT Box Office or online at SCRTheatre.com. Purchase your tickets soon as tickets are expected to go quickly for this emotionally intimate season where audiences will feel more connected to these characters than ever before.

New Legends Readers: SCRT releases $25 ticket promo code for NLM readers ($35 full price). The promo code is “NEWLEGENDS” and can be used at our box office or online.