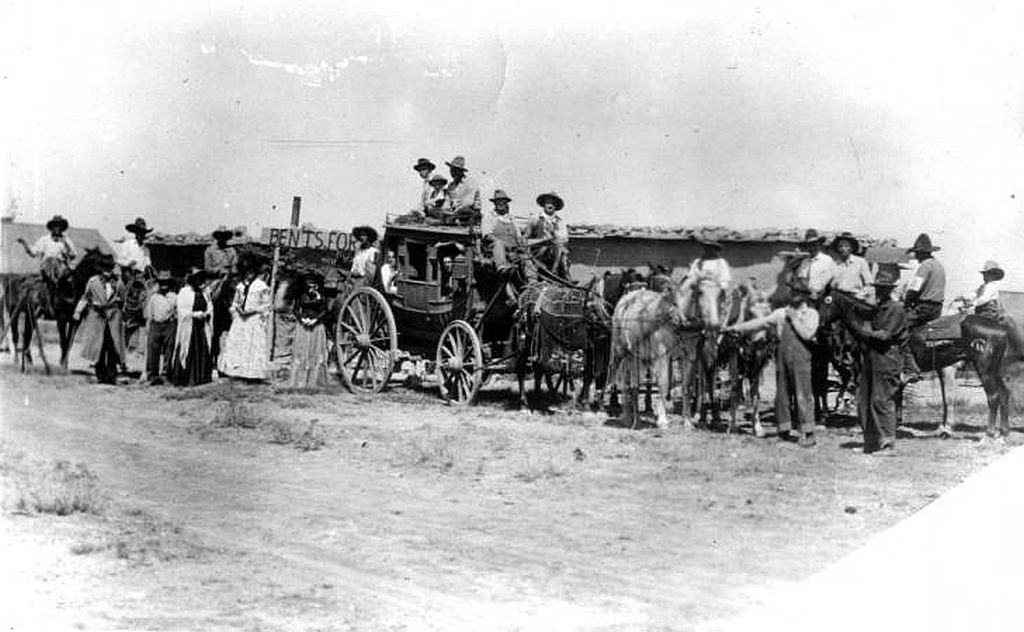 The Bent Brothers & Their Historic Fort

On a warm spring day in 1830, Charles and William Bent stood on a small hill, one of the few in the area which overlooked the mighty Arkansas River. It would be here that the Bent brothers would construct the first trading post along the western section of the Santa Fe Trail. For more than fifteen years, Bent’s Fort was the dominant structure along the westward route and the hub of all activity. The wagon trains following the Santa Fe Trail regarded the fort as a welcome resting spot. Indians, who watched their land and freedom disappear, traded for supplies at the fort. Conversely, military expeditions pursuing the concept of Manifest Destiny, guarding and fighting against Indians, used the fort as a point of contact. Of the many traders along the Santa Fe Trail, the Bent brothers proved to be the most adept at working with Indians, as well as the military in times of conflict.

In 1829, Bent commanded a caravan of wagons, loaded with trade goods, along the Santa Fe Trail bound for Santa Fe. Again, the trip proved extremely profitable. With such success Bent formulated a plan to capitalize on the opportunities of the newly opened Santa Fe trade.

In 1830, Charles Bent and Ceran St. Vrain, established the Bent, St. Vrain & Company, which became the foundation of a trading empire that covered much of the West, including hundreds of square miles of modern-day Colorado, New Mexico, Arizona, Kansas, Texas and Utah.

It was here that Bent, St. Vrain & Company built their first trading post known as Fort William, after another Bent brother, William, who by this time had joined his brothers on the Colorado plains.  The rectangular stockade was 150-feet long on the north and south sides and 135-feet in length on the east and south sides. The walls stood fifteen feet high and were four feet thick. The entrance was on the east side with two thick plank doors providing security. Cannons were placed in the bastions located at the both the northwest and southwest corners. These towers were ten feet in diameter and thirty feet high. Cactus plants were strategically landscaped into the dirt roof to thwart climbers. The central court was open for trading. Rooms were on the lower and upper level of the complex. The floors were of beaten clay. The fort could be seen for miles on the flat land and soon became known as the “Citadel of the Plains” by travelers along the Santa Fe Trail.

When completed, William became the primary manager of the fort’s activities, bringing successful trading negotiations, among the trappers and traders, as well as the many Indian tribes of the southern plains. Yellow Wolf, chief of the Cheyenne, became a trustworthy friend of the Bent brothers. He and other leaders affectionately bestowed Cheyenne names upon the brothers. Charles was known as Pe-ki-ree, “White Hat.” William was named Schi-vehoe, “Little White Man.”

Of the many traders along the Santa Fe Trail, William Bent proved to be quite proficient in adapting to the growing movement of Westward Migration. As new territories shifted, the Bent brothers expanded to meet the demand of territorial commerce. As a prominent landmark on the Santa Fe Trail, the Bent brothers along with Ceran St. Vrain, were instrumental in playing an active role in the expansion of the United States into Mexico. As such, their trading post was often referred to as Bent’s Fort. The name stuck.

Both Charles and William Bent maintained friendly relations with the Indians. In 1835, William Bent married Owl Woman, the daughter of Tall Woman and White Thunder, the keeper of the Cheyenne Sacred Medicine Arrows. Through this intermarriage, the first of several in the Arkansas Valley, a relative peace was maintained between the two cultures for several years. Four children would be born to the union.

While William, along with his younger brothers, George and Robert, operated the fort while older brother Charles made regular trips to Santa Fe with wagon loads of trade goods. Charles Bent became so absorbed with the southwestern trade through his travels, he eventually established a permanent home in the Taos Plaza, a small Mexican Indian town north of Santa Fe.

Also in 1835, Charles Bent met the beautiful widow, Maria Ignacia Jaramillo Luna. Maria’s family were well established in the fabric that was the politics of Mexico. Maria’s father, Jose Raphael Sena de Luna, Sr., was the head of the customs house in Taos. Her mother, Maria Apolonia Jaramillo, was the daughter of Francisco Jaramillo, a successful merchant on the Santa Fe Trail.

Following a year of courtship, Charles Bent and Maria Ignacia Jaramillo Luna were married. Due to the political influence of his new in-laws, Charles also became heavily involved in that town’s civic affairs, and soon established himself as one of the most prominent, well-respected residents of Taos.

In 1849, an outbreak of cholera killed a large percentage of the Southern Cheyenne and Comanche tribes in the region. Because of the health epidemic, Bent’s Fort was deserted. William took his family to the Big Timbers area some twenty miles down-river along the Arkansas River.

Perhaps due to the cholera outbreak, or his grief of losing so many loved ones, William attempted to sell the stockade to the United States government. After a period of negotiation, the government finally declined to purchase the fort. Out of frustration, William Bent set explosives in the gunpowder room of the fort. Lighting the fuse, he ran from the fort and watched as the explosion blasted the infamous stockade into ruins. With this act, the “Citadel of the Plains” was no more and an important era of Colorado’s frontier came to an end.

In 1853, William built a new fort, commonly known as Bent’s New Fort. Located in the Big Timbers of the Santa Fe Trail, this new stockade was constructed on elevated ground above the river. While the position provided a commanding view from all directions, it could only be accessed from one direction, an added benefit for security purposes.

Following the discovery of gold in the Colorado Rocky Mountains in 1859, a new onslaught of travelers and gold seekers traveled the Santa Fe Trail westward. For the otherwise peaceful Indian tribes in the region, the encroachment of such a large population caused tension among the traders and Indians at Bent’s Fort. William Bent worked for peace between the two cultures and advocated for a peaceful solution. “Little White Man,” as the Cheyenne called William, was advocating on behalf of his wife and his children’s people.

Charles Bent was murdered in the Toas revolt. A grieving William Bent continued to negotiate for peace between the white man and the Indian following his testimony in the military inquiries regarding the actions of Colonel Chivington at the Sand Creek Massacre.

William Bent died of pneumonia in 1869, still trading and seeking peace with the Indians and the encroaching white men. He was buried in the Las Animas Cemetery, the seat of Bent County, named for the great frontiersman.

For over forty years, William Bent was known as the “Peace Keeper” with the Native Americans. His expansive trading empire was the largest in western America. Bent’s Fort, a pioneering marvel, is a legacy along the Santa Fe Trail.