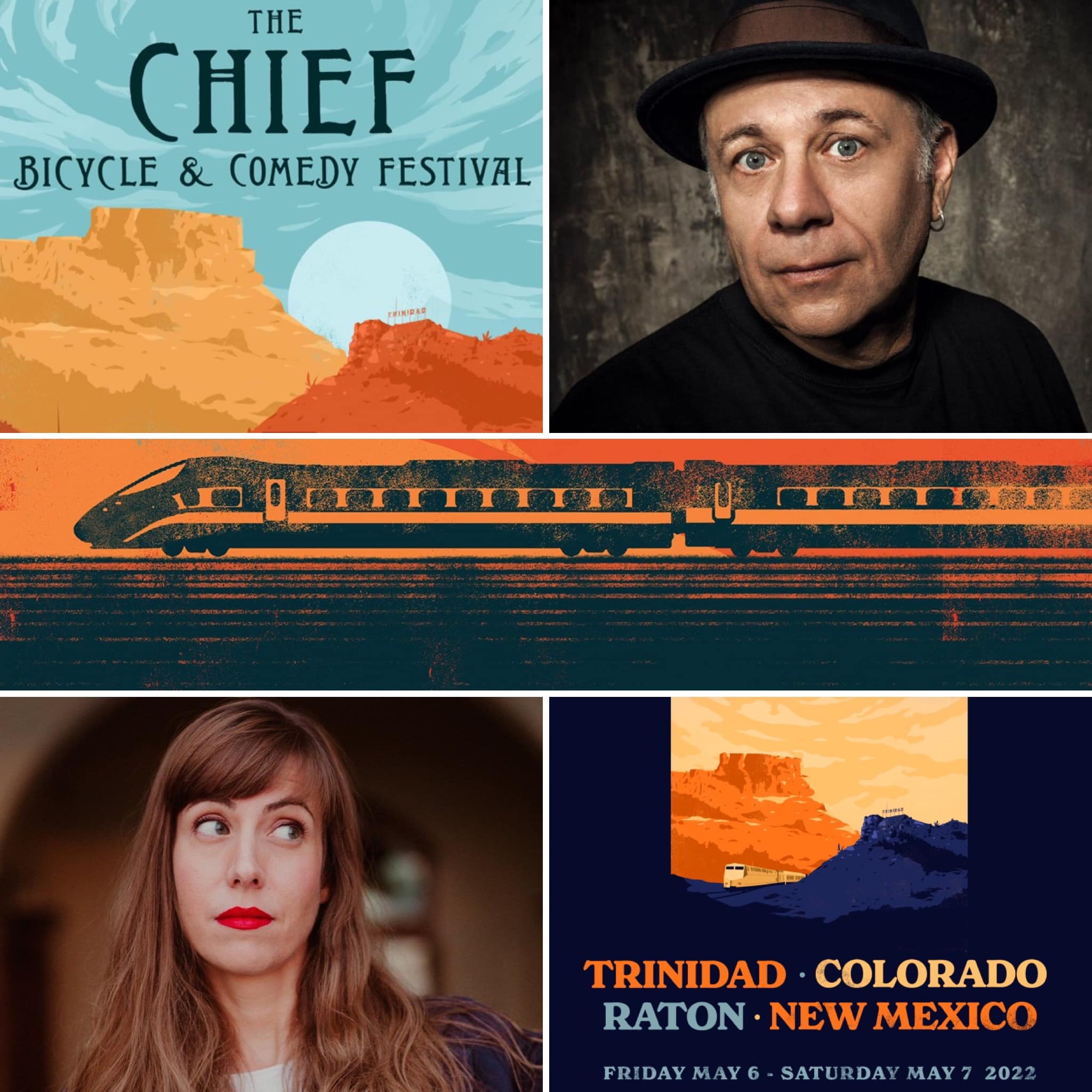 THE CHIEF BICYCLE & COMEDY FESTIVAL is taking to the rails with comedy shows in Trinidad, CO, Raton, NM and on Amtrak’s Southwest Chief train May 6 & 7 2022!

All aboard the comedy train! Trinidad Colorado’s annual comedy and bicycling extravaganza returns, and this year’s festival will host day time comedy showcases in Raton, New Mexico with “Colexico Experience” ticket packages that include roundtrip transportation over Raton Pass on the Southwest Chief passenger rail line featuring LIVE comedy performances on the train. 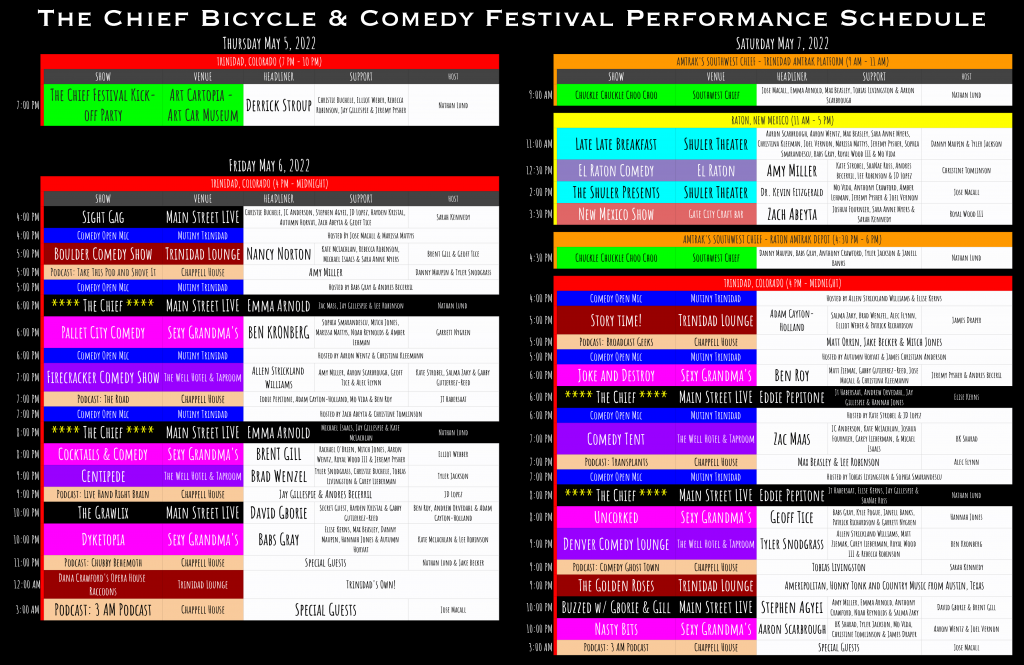 Founded in 2019 with the concept of bringing comedians from Chicago and Los Angeles via locomotive to Trinidad for a weekend of bicycling and comedy activities, The Chief Bicycle & Comedy Festival is back, and in 2022 it is growing into a multi-state festival with evening performances in Trinidad, CO and daytime comedy happening in Raton, NM. Featuring 70 comedians performing on over two dozen comedy showcases spread across multiple venues for two days of laughs, this year’s festival will include headlining performances by Eddie Pepitone and Emma Arnold.

They call him the Bitter Buddha, comedian EDDIE PEPITONE is a master of the dark art of comedy. Hailed as a modern day cross between Jackie Gleason, Don Rickles and Eckart Tolle. Eddie is a force of nature on stage, switching between social rage and self-doubt. His shows are an energetic combo of calm and chaos, blue-collar angst and sardonic enlightenment. Few comedians working today channel the power of the rant better than Eddie Pepitone. Pepitone’s special ‘In Ruins’ debuted on Netflix, and his most recent one hour special ‘For The Masses’ earned him ‘best comedy special of 2020’ by the New York Times. Eddie boasts recurring roles on Late Night with Conan O’Brien, and has also appeared on numerous comedy TV shows, including The Life and Times of Tim, It’s Always Sunny in Philadelphia, The Sarah Silverman Program, Jimmy Kimmel Live, Last Comic Standing, Chappelle’s Show, Rick and Morty, Bob’s Burgers, and he’s a regular on Adult Swim’s Your Pretty Face is Going to Hell. Fans also might recognize Pepitone from his role in the hit comedy Old School, and Eddie is often teamed on the road with fellow comic JT Habersaat.

EMMA ARNOLD is an Idaho backcountry-raised comedian, author, artist, and beekeeper. Her self-produced comedy special, “Yes, Please” (financially backed by comedy legends Bobcat Goldthwait and Dana Gould) has millions of views on youtube and she put out four standup comedy albums with Blonde Medicine Records in as many years. She co-founded/directed two wildly popular comedy festivals and was recently featured in Forbes Magazine, who called her, “One of the hardest working comics in the industry.” In addition to touring, she has a popular podcast and patreon and is mom to three giant sons. Equal parts outrageous, thoughtful, engaging and honest, whatever the medium, Emma’s work is electric and straight from the heart. When not touring, she lives in Boise, where she keeps bees and children with varying degrees of success.

Hosted by Colorado comedy crushers NATHAN LUND of the CHUBBY BEHEMOTH PODCAST, The Chief Festival 2022 will welcome back Colorado comedy heroes THE GRAWLIX, late night staples like BRAD WENZEL, celebrated voices like DAVID GBORIE, and future house-hold names like STEPHEN AGYEI along with dozens of the best up-and-coming comics from around the country performing on the festival for the first time.

But the Chief isn’t only about comedy! We’re asking attendees to BYOB (Bring Your Own Bicycle) for cycling activities happening daily before the comedy kicks off each night. With Trinidad being named Graveltown, USA by Velo News in March 2021, and now being the home to Lifetime Fitness’ annual gravel cycling race “The Rad Dirt Fest”, cyclists are encouraged to use this event as their opportunity to explore Las Animas County’s thousands of miles of county roads with curated gravel rides led by Juan DelaRoca of Backshop Bikes on Saturday May 7th, and in-town “cruises” each evening.

Thank you for your interest in the The Chief Bicycle & Comedy Festival!