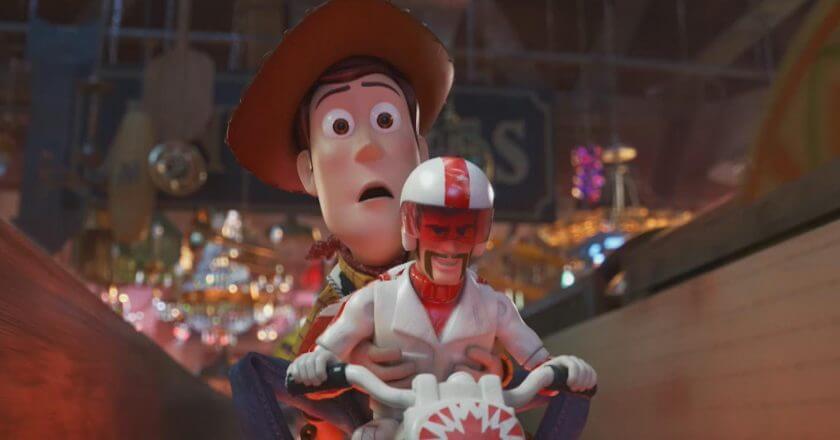 Classic characters return with personalities audiences have always liked, while finding new fears, new purposes, and new friends. The latest installment in the franchise is true to tradition being a film the entire family can enjoy. The film addresses fears of parenting, empty-nesting, shyness, loss, responsibility and growing up, all while reminding us of the joy of toys and imagination.

For the adult fans: For a fourth installment, there’s not much to protest; perhaps the running gag about Buzz Lightyear’s “inner voice”. Didn’t he become more grounded and less fantastical after the first movie?

While fans of the series should be familiar with the inclusion of suspense elements, very young children might be frightened later in the film. The antique store modeled after “The Shining” hotel is a long running creepy scene. A number of silent ventriloquist dummy henchmen multiply during dialogue & action. The silent characters are reminiscent of R.L. Stein’s Goosebumps character Slappy. The leader is much less scary, an adorable but misunderstood Gabby Gabby Doll who really needs to be played with.

“I liked all the ‘Lost Toys’ that were excited to be played with by all the kids at the playground.” – Cloud Smith, NLM Junior Correspondent

Forky – Craft Project “Toy” Believes He is Trash – Tony Hale: Magical. Parents who have experienced the joys of preschoolers will love him and so will your toddlers and teens *no more spoilers about him*

Duke Caboom – America’s Current Favorite Celebrity; Keanu Reeves. Duke; the Canadian Evel Knievel with his accompanying “Oh, Canada” music tragically recalls his owner’s disappointment in not being as exciting as the commercials – an oh too familiar tale from children of every generation – must accept his inability to successfully complete a jump and embrace his ability to crash like no one else can.

Ducky & Bunny – Key & Peel: Hilarity Ensued. These characters have the absolute best ideas. You’ll find out why when you see this film!

Randy Newman’s musical numbers pop up occasionally through the 100-minute run time along with fun that will hold the children’s attention until the final credits. The film’s overall message of positive transition, overcoming fears and anxiety and letting go resonate with those who have grown up with the series as well as the next generation.

See Toy Story 4 and all of the latest film releases at Peak Cinemas on Main Street in Trinidad. Showtimes available at peakcinemas.com and in the New Legends Weekend Express.