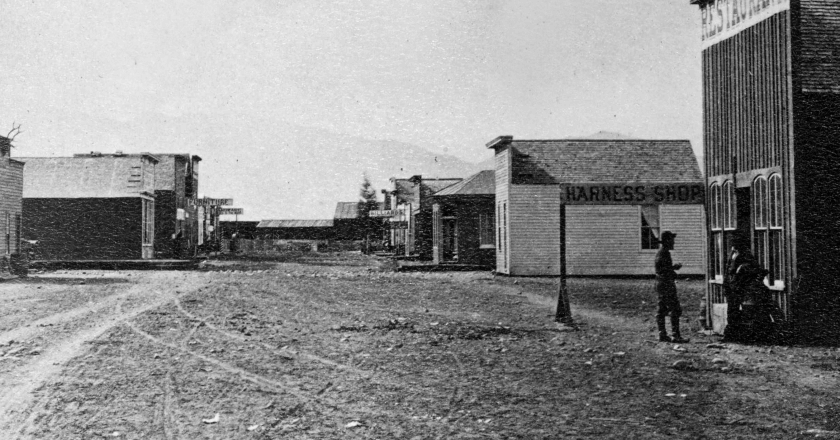 Many changes have come over the years since Las Animas County was created. During one of those changes proof of ancient and not so ancient history emerged – that is until it was subsequently submerged.

In approximately 1862, a sheep herder, Francisco Gallegos, went into partnership with Eldridge B. Sopris to open a coal mine near the Purgatoire River. In 1888, Sopris sold his mine to John C. Osgood, owner of one of the largest coal operations in the state, the Colorado Fuel & Iron Company. Osgood established a company town he called Sopris.  As with many of the CF&I mines, the town served the needs of the miners.

“Mostly out of need, but partly from paternalistic motives and occasionally because of avarice, the operators established company stores to sell groceries, clothing, and other items; obtained doctors; and otherwise attempted to establish the essentials of community life” – U.S. Coal Mines Administration, 1947

Sopris, located four miles west of Trinidad, was a close-knit mining community. Rows of uniformly square two and three-room wooden homes with four-sided roofs and a chimney in the center, lined the main street which led into and out of the mining town. Called tenant houses, they rented for $45 a month. The company provided a library, one school, and one church for the miners and their families. In an effort to mold a compliant and passive work force the company also offered free programs such as nightly English classes at the library and traveling lectures with topics that included civics, homemaking, and proper hygiene. Local dances were a favorite in the mining camp. The Camp and Plant, a company publication, naturally had nothing but good things to say in one of its reports regarding the dances in 1913.

“A glorious good time was had by all. A good crowd was present, including many from Trinidad. The hall was crowded to its fullest capacity. At midnight the wives served delicious refreshments. It was an early hour when the crowd dispersed.”

It was during this time that Sopris had its largest population, 2000 residents. Along with the Sopris mine, the miners also worked nearly 300 coke ovens. Following World War I the demand for coal slowed considerably. America’s new fuel, petroleum, became the primary fuel of choice. Demand peaked somewhat during World War II, however, by war’s end most of southern Colorado’s coal mines were closing. In March 1922, an explosion happened in the Sopris mine #2. Seventeen men were killed. This mine never reopened.

The main Sopris mine actually shut down in 1940. Many of the miners and their families moved on, but some stayed. For the next decade approximately 300 citizens lived in the old mining camp of Sopris.

After years of the Purgatoire River flooding and causing costly damage, the United States Army Corps of Engineers embarked on a huge project; the Purgatoire River would be rerouted and plans for a new dam were being put into place. 1965 was the last year for Sopris High, also known as Lincoln High School. Thereafter children were bused to schools in Trinidad.

It was during the early stages of the dam construction that archaeologists were able to finally document evidence of Sopris, a Native American tribe who lived in the region from approximately 950 to 1200 AD. Evidence of stone houses, fire pits and adobe structures were recorded by the Department of Anthropology at Trinidad State Junior College.

By 1969 and early 1970, the dam was nearly complete. Families were now forced to leave and were offered eight dollars a square foot for their homes. Some of the Sopris residents sold, others moved their homes to Trinidad where they can still be seen today. Buried bodies in the Sopris cemetery were moved to the Carpio Catholic Cemetery east of Trinidad. One observer wrote: “Because Sopris never bothered to incorporate, the government did not have to build new houses for the people or move them to a new location. They were simply paid a sum of money for their places and told to move, and their homes were bulldozed into piles of rubble.”

In 1973 Trinidad Lake began to fill. It would be five years before it would be filled and then opened to the public. Today, Trinidad Lake State Park is considered the recreational “jewel” of southern Colorado. The lake area, nestled in the shadow of the Culebra Range of the Sangre de Cristo Mountains, borders the Highway of Legends and the Santa Fe Trail. There are trails all around the 2, 500 acre state park area for exploring the flora and fauna, as well as Trinidad sandstone and Pierre shale along Long’s Canyon Trail.

Trinidad Lake is known for its great fishing. Rainbow trout, brown trout, largemouth bass, catfish, walleye, crappie, and bluegill are found in the lake. There are several fishing tournaments throughout the season at the lake. There is plenty of boating and jet ski activity on the lake for the adventurous camper. Speaking of camping, there are two campgrounds, one overlooking the lake and one closer to the shoreline.

While the history of Sopris may lie at the bottom of the lake, Trinidad Lake has become the “jewel” of Trinidad.