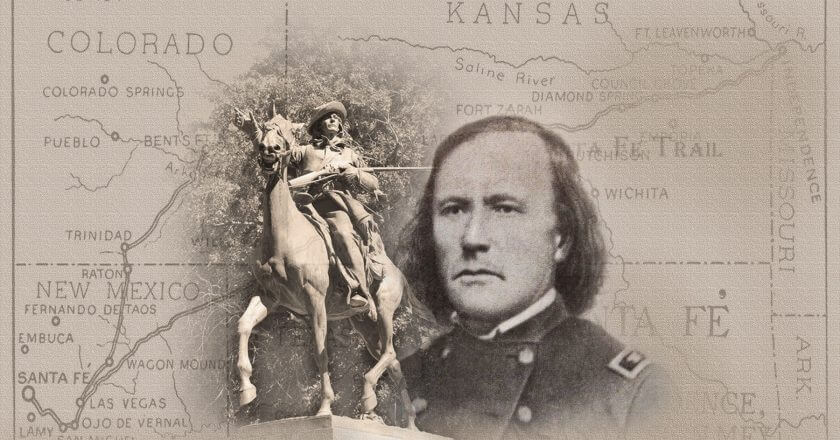 During the Christmas season of 1867, Christopher “Kit” Carson, his wife Maria Josefa Jaramillo Carson, and their six children moved to Boggsville, in the southeastern area of Colorado Territory. Carson had just been relieved of his command at Fort Garland, as the United States Army was trimming its forces. Thomas O. Boggs immediately offered his in-laws, the Carson family, the adjoining three vacant rooms of a six-room adobe outbuilding. John Carson, a direct descendant of Carson later remarked: “Back then you had to work together with people in order to survive. Boggsville gave permanency to the area. People knew they would be treated well there. It was a haven where they wouldn’t be cheated.”
Josefa was happy to be reunited with her sister Maria Ignacia, who lived with the Boggs family, as well as her niece, Rumalda Boggs, Thomas’ wife.
However, upon Carson’s arrival at Boggsville, it was obvious to all that his health was declining. Carson must have realized it as well. Not long after his family had settled into their new home, which Carson hoped was temporary, he traveled the few miles to the home of his old friend, William Bent. It was during this visit that Carson met Doctor Henry R. Tilton, the army surgeon at Fort Lyon. After casual conversation, Carson told the doctor of his ailments. Dr. Tilton later wrote: “He was then complaining of a pain in his chest, the origin of which he attributed to a fall received in 1860. It happened while he was descending a mountain.”
Dr. Tilton offered to take Carson, in his carriage, to Fort Lyon for a detailed consultation. After a rigorous exam, Carson was diagnosed with an aneurysm of the carotid artery. Doctor Henry R. Tilton later described the sad event: “The General, as Carson was popularly and officially known, now was a sick man, without long-assured income, [and] was the sole support of a goodly family, and was facing evil days.”
Josefa, who was present when the doctor gave the couple the devastating news, struggled amid her pregnancy to keep both her husband and children in optimistic spirits. Her niece, Rumalda Boggs, helped with the children, the cooking, and cleaning, which provided time for Josefa to rest and take care of herself and her unborn baby. In late January 1868, General Carson was among many Colorado dignitaries called to Washington D. C. by the War Department for a conference on how best to prevent Indian uprisings. Despite his declining health, Carson agreed to accompany Colorado Governor Alexander C. Hunt, and a Ute delegation of chiefs, including his friend Chief Ouray, for a peace council with President Andrew Johnson.
On the return trip, Carson became very ill yet managed to make it to his home at Boggsville. Two days later, on April 13, 1868, Carson’s wife Josefa gave birth to the couple’s seventh child. While the baby girl was healthy, Josefa was quite weak and remained in bed for days. Carson sat by his wife’s side, confident Josefa would be fine. He wrote a letter to a friend, relaying such optimism: “I arrived home on the 11th inst. and found my family well. I was very sick but since my arrival home, I have improved some and hope it will continue.”

Sadly, on April 27, 1868, Josefa died. Kit Carson gave the baby a name, Josefita, in honor of her mother and his beloved wife. Perhaps due to his grief, Carson’s illness rapidly deteriorated. On May 14, 1868, Thomas Boggs hitched his wagon and drove the ailing Carson to Fort Lyon. There, Doctor Henry R. Tilton thoroughly examined Carson. Doctor Tilton later described the situation: “His [Carson] disease, aneurysm of the aorta, had progressed rapidly; and the tumor pressing on the pneumogastric nerves and trachea caused frequent spasms of the bronchial tubes which were exceedingly distressing.” Fearing Carson would not live much longer, Dr. Tilton moved the Civil War General to the chapel for his comfort as well as privacy. For the next two weeks Dr. Tilton tended to his only patient day and night, doing what he could to ease Carson’s pain. He encouraged Carson to write out his last will, which the dying man did. Carson named Thomas and Rumalda Boggs guardians of his children and Boggs as executor of his estate. At 4:25 in the afternoon of May 23, 1868, Carson began coughing and blood spurted from his mouth. “I supported his forehead on my hand while death speedily closed the scene,” wrote Dr. Tilton. Carson’s last words in Spanish were, “Adios compadre.”

With the passing of General Christopher Houston “Kit” Carson, the commander of Fort Lyon ordered the American flag flying high over Fort Lyon lowered to half-mast, in honor of the General. The following day, after a brief ceremony which included rifle volleys and the playing of Taps, Fort Lyon soldiers led a procession to Boggsville, carrying the casket of General Christopher Carson. Upon arrival at Boggsville that solemn day, the Fort Lyon soldiers carried the casket to the grave next to his beloved wife, Josefa. A year later, almost to the day, Thomas O. Boggs, executor of Carson’s will, disinterred the bodies of Kit and Josefa Carson and transported them to Taos, New Mexico, for final burial, according to Carson’s wishes. In a private ceremony, the bodies of Mr. and Mrs. Christopher “Kit” Carson were buried in the Taos cemetery near the town plaza. For several decades, Carson’s older sons, Christopher Carson Jr. and Charles, cared for their parents’ grave site, although there was no headstone.

In 1908, the Taos Masons placed an engraved marble headstone at Kit Carson’s grave. Carson’s sons followed with a smaller marble stone for their mother, Josefa. In time, a wrought iron fence was erected around the Carson family plot and the couple’s youngest child, Josefita Carson Squire was buried next to the parents she never knew.
Today, the cemetery is part of the Kit Carson Memorial Park. An American flag flies over the cemetery and the town plaza twenty-four hours a day, commemorating an event during the Civil War when the flag and the town were threatened by Confederate sympathizers. It was Kit Carson who led a band of soldiers to guard the town and the flag day and night. It is fitting that the town of Taos return the favor with a flag flying day and night of the grave of their war hero.